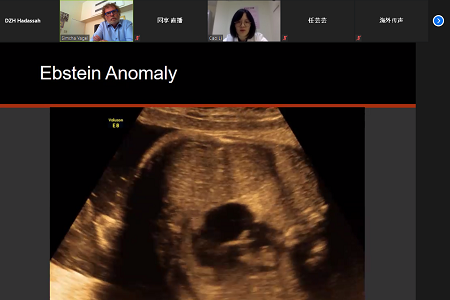 With the help of a Chinese translator, Prof. Simcha Yagel, head of the Division of Obstetrics and Gynecology at the Hadassah Medical Organization, shared his expertise with over 1,200 Chinese physicians regarding his method of detecting heart problems in utero.

As he explained in his June 22 webinar, a physician who has identified abnormalities in a fetus will be prepared to operate immediately after the baby’s birth if necessary. During this highly technical webinar, Prof. Yagel highlighted various fetal scenarios on the screen and illustrated how he diagnoses the heart defects.

Having joined the OB/GYN staff at Hadassah Hospital Mount Scopus as a young resident in 1981, Prof. Yagel went on to establish its Obstetric and Gynecological Ultrasound Unit. In 1994, he founded the Magda and Richard Hoffman Center for Human Placenta Research, where he still serves as director.

Prof. Yagel’s clinical work focuses primarily on 3D/4D ultrasound of the fetal cardiovascular system. He is the author of the textbook Fetal Cardiology and has published over 300 articles in leading peer-reviewed journals. Most recently, Prof. Yagel and his colleagues have been concentrating on 3D/4D fetal echocardiography and evaluation of fetal heart functioning, 3D/4D neuro-sonography, and 3D/4D ultrasound of other organ systems, including the female pelvic floor and the changes observed during childbirth as they relate to pelvic floor dysfunction later in life.