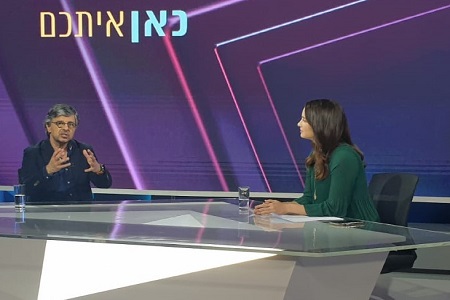 Hadassah senior geriatrician Dr. Yoram Maaravi has taken to the airwaves across Israel to offer insights to doctors, the media, and the public about the risks older people face from the coronavirus.

“International information sources refer to age in a chronological, generalized way, stating that anyone over 60 is at high risk from COVID-19 and that the older one gets, the greater the risk,” Dr. Maaravi told his Kan Bet national radio interviewer. He explained, “Geriatricians know this data can be misleading. Those in their 80s and 90s who are dying at higher rates are people who were already functionally disabled, had previous chronic conditions, or were in cognitive decline.”

While medical experts argue that elderly people are more at risk simply because their immune systems are not as robust as those of younger people, Dr. Maaravi reported that it is certain illnesses that make people particularly susceptible to COVID-19. These include cancer, diabetes, heart disease, and chronic lung conditions.

A strong advocate against stereotyping the elderly in a negative way, Dr. Maaravi, director of Hadassah’s Department of Geriatric Rehabilitation, noted, “There’s no shame in shouting loud and clear, ‘I’m old.’ ” He objects to euphemisms like “golden age,” “third age,” and “seniors.” As he stated, “I’m for aging, and I hate the term ‘anti-aging.’ For Dr. Maaravi, “old” is an honorable term.

Given his advocacy on behalf of old people, Dr. Maaravi was recently featured in the TV show 80 Plus 4, a series that pairs elderly residents of an assisted-living complex with four-year-olds from a nearby kindergarten for joint activities. Dr. Maaravi has evaluated not only the venture’s emotional impact on the residents but also the physical changes. The results? Positive on both fronts.