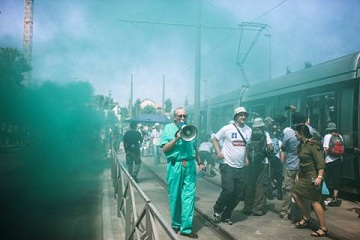 Hadassah-Hebrew University medical students simulated a terror attack on Jerusalem’s new light rail as their final test at the completion of a 10-day trauma course.

The drill was arranged by Prof. Avi Rivkind, Chief of General Surgery and head of the Trauma Unit at the Hadassah University Medical Center. During the simulation, medical students acted as doctors, victims, supervisors, photographers, and press spokesmen. Some students, acting as the wounded, positioned themselves behind fences in the bushes, as if the terror blast had thrown them there. Others lay down motionless in the street, attempting to recreate an authentic mass casualty event. The goal was for novice medical staffers to receive training and for veterans to learn new ways to improve their performance. Read the entire story by Judy Siegel in The Jerusalem Post. http://www.jpost.com/Health/Article.aspx?id=278950