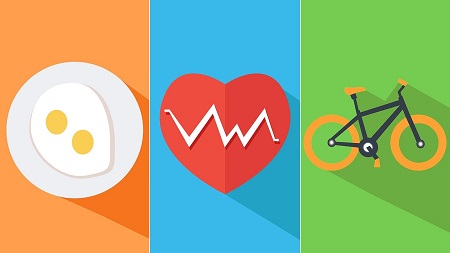 Ephraim Kedar was a 47-year-old career Israel Defense Forces (IDF) officer teaching the technology of tanks and half-tracks when out of the blue he was struck with an unbearable thirst.

“I was too weak to drive myself to the doctor,” he said. The diagnosis was type 2 diabetes. A day later he couldn’t see. “Being strong was always important in my family,” said Kedar, now an athletic 67-year-old who lives in Rehovot.

“My father survived four forced labor camps in Romania during the Holocaust. My mother also suffered. When they came to Israel, they were assigned to work in agriculture, something they knew little about, but slowly they made their way, and my two older sisters and I did well. Suddenly, in the prime of my life, I was immobilized by a disease I knew nothing about.”

Kedar began treatment for diabetes but wasn’t balanced. “My sight came back, but I didn’t know when I’d be able to function normally again. Many colleagues with diabetes made light of the disease—just a problem with eating cakes, they thought, and you take the pills. I was having five or six shots a day and doing poorly.”

A long-lost friend hailed him one day at the IDF Tank School. “I invited him for coffee, and, as we sat there, I saw he was wearing a little instrument. He told me he had diabetes and was using an insulin pump that had been recommended at Hadassah Hospital. I got goosebumps—as if he were an emissary sent by God. He told me that if I wanted to get my diabetes under control, I should make an immediate appointment at Hadassah, that it was at a different level.”

“At Hadassah, they look at you as a whole person with diabetes, which impacts your entire body, from your head to the tips of your toes,” he said. An hour-long daily walk and healthy eating are part of the regimen that now allows Kedar to continue lecturing and living a full family life.

Just recently, Kedar, his wife, children, and granddaughter celebrated his birthday at a restaurant. “We had a wonderful time, but when they came to the birthday cake, they knew I’d pass. I can tell you how to repair a tank in the field, but when it comes to diabetes, there’s no place better to protect you than Hadassah.”