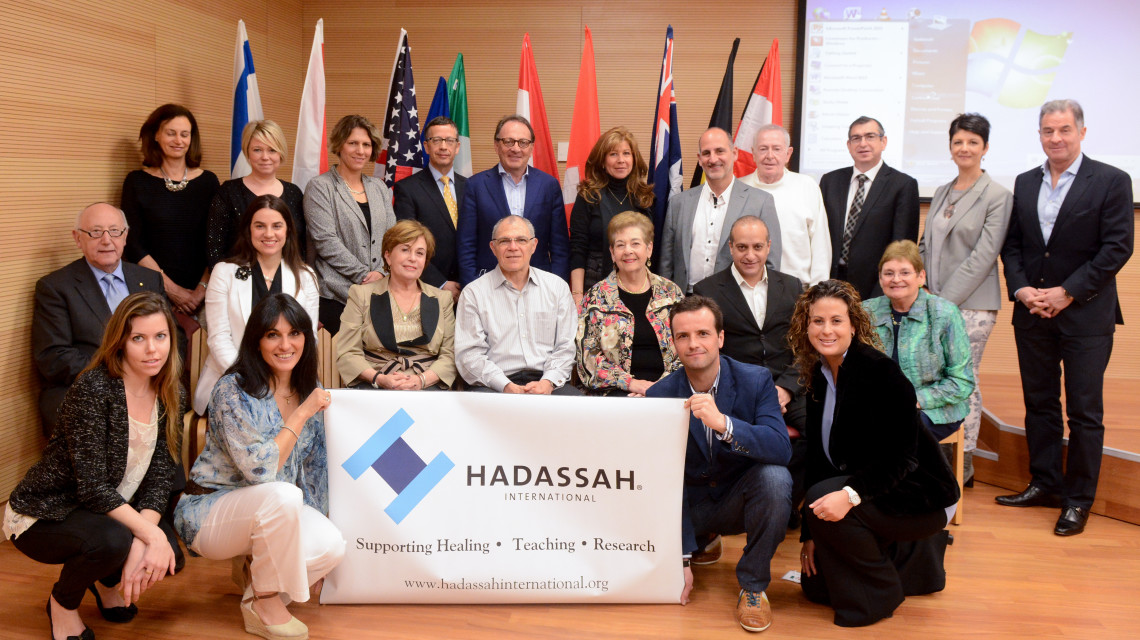 Hadassah International leadership came together from the four corners of the earth, gathering in Jerusalem to learn, to exchange ideas, and to be inspired by the life-changing work of the Hadassah Hospitals.

“Do not let anyone turn our music down. We will face challenges. Only dead organizations don’t have them. But we have the international talent, support and expertise to overcome them.”

Prof. Yoram Weiss, Medical Director of Hadassah Hospital-Ein Kerem, discussed the wonderful new Sarah Wetsman Davidson Hospital Tower and what is still needed to complete the furnishing of the Tower. Led by Prof. Weiss (in blue shirt), delegates to the conference visited the new Surgical Intensive Care Unit, which has been functioning fully since February, to see how their work and the donations they have raised for the Tower have enabled the Hadassah Hospital to save lives. The Surgical Intensive Care Unit they visited is intended to ensure that patients who are very ill are totally protected from possible infection, while being able to still have access to the world around them. Hadassah International is currently raising the money to furnish the 13 state-of-the-art new operating theaters in the Tower that are scheduled to open this year.

After a briefing on the current status of the Hospitals from Director General Avigdor Kaplan (on right, with Hadassah International President Moishe Sandler), the delegates were treated to several physician-scientists at Hadassah discussing the latest research at Hadassah and how the work that they are doing has the potential to save lives around the world.

Prof. Avi Rivkind, head of the Trauma Unit and Senior Surgeon in the Department of General Surgery, discussed how the methodology he and his team in the Hadassah Trauma Unit and the Center for Emergency Medicine developed to handle the victims of terrorist attacks has been shared around the world. His work in training personnel in hospitals in Boston resulted in the outstanding medical response to the explosion during the Boston Marathon, and the saving of many lives.

Prof. Rivkind also inspired the Hadassah International leadership as he spoke of his work in saving the life and limbs of a young girl named Adi Hooja, who was severely injured in a terrorist attack in 2001.

This past month Prof. Rivkind  was privileged to dance at Adi’s wedding.

Prof. Orly Elpeleg, head of Hadassah’s Metabolic and Genetic Diseases Unit, discussed the work she is doing in finding disease-infected genes in children whose family genetics results in multiple children with the same very rare disease. Once she has identified the abnormal gene and its effect on the children, she can start to design a solution for the family and, through IVF, make sure that future children will not be affected.

Prof. Benjamin Reubinoff, who heads Hadassah’s Human Embryonic Stem Cell Research Center and the potential commercialization of human embryonic stem cells through the Hadassah spin-off Cell Cure Neurosciences Ltd., spoke about the cutting-edge stem cell research that Hadassah has been engaged in since 2009. Hadassah has made many “first in the world” breakthroughs with stem cell research, particularly with embryonic stem cells.

Prof. Reubinoff has now received the funding for the ”first in the world trials” to treat macular degeneration with embryonic stem cells that he has developed, and Hadassah will start these trials shortly.

Prof. Yaacov Naparstek, Senior Deputy Director General  for Research and Academic Affairs at Hadassah, spoke about the importance of the physician scientist, who is able to bring the latest in research to treat his patients, while using the medical problems of his patients to inspire research. This practice of translational research (Bench to Bedside) is falling off in most hospitals. At Hadassah, it is a part of the DNA of the hospital, and an intrinsic part of the treatment of patients. This has resulted in Hadassah doing more medical research and publishing more papers than all the other hospitals in Israel combined, and has resulted in Hadassah being able to spin off several innovations for commercial development through Hadasit.

At a fun Purim dinner in downtown Jerusalem, conference delegates were moved to tears by the words and story of David Fintzi, a young Romanian (he just turned 19 years old), who was electrocuted  in August 2013, and burned over much of his body. Hospitals in Romania and Germany held out no hope for David, so his family had David airlifted to Hadassah.  Speaking in perfect English, David spoke about how he still has many months of treatment ahead of him, but is now able to walk and is being treated as an outpatient at Hadassah. His mother, Manuela, who accompanied David, spoke of her hopes and fears during his miraculous recovery. They both thanked Hadassah for saving David’s life, when everyone else had offered them no hope.

The final day of the Conference was spent in discussions of how Hadassah International can move forward to raise the money to support Hadassah’s research and to help to finish equipping the Tower. Working together, delegates discussed how Hadassah International’s strengths can be used to address those areas that need improvement. The group then divided into teams that will each work in the coming months to resolve the issues delegates had perceived as needing attention in order to improve the organization’s performance.

Those delegates who stayed on in Jerusalem for an extra day joined in a demonstration outside the Knesset, asking Israel’s government to support the gem that is Hadassah as it restructures and moves forward, continuing the Healing, Teaching, and Research that brings a ray of light to the world.