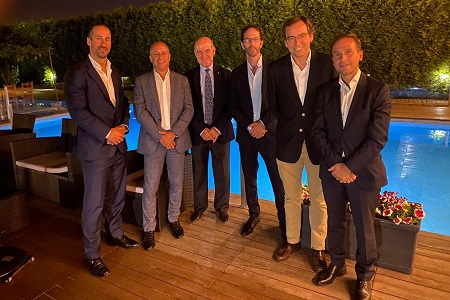 Earlier this year, the Israeli Ambassador to Spain and the Spanish Jewish Community arranged a Zoom conference to share the Hadassah Medical Center’s considerable expertise in dealing with COVID-19 with medical institutions and other health-related organizations in Spain.

The response was immediate, as both Jewish and non-Jewish organizations were eager to benefit from Hadassah’s experience and knowledge in many areas of medicine. From this, the seed of a concept for International Collaboration with Spain was formed.

Individuals, organizations, and institutions with an interest in various medical issues have expressed an interest in this venture, and the first event will occur in October in Madrid. Working together with the Center Sefarad Israel, Hadassah International will feature Hadassah experts in a series of public events that will present Hadassah’s innovations to Spanish society.

In the ancient city of Porto, Portugal, Diener, and Wiesner met with the leaders of the Fernando Pessoa Foundation, which owns a University Hospital complex. This group of non-Jews admire Israel and are now working with Hadassah to create a partnership that will help them bring teaching and medicine from Israel to Portugal and by extent, to Europe.

While in Porto, Diener and Wiesner visited the “Sinagoga Kadoorie,” which opened its doors in 1938 at the same time that in other parts of Europe Jews were starting to struggle under the Nazi cloud. There they were able to meet with a community of Jews from all over the world who have made Porto their home and the synagogue the pillar of a Jewish renaissance.

At the conclusion of this fruitful trip to Iberia, Andy Wiesner stated “It appears that several institutions are delighted to receive access to Hadassah’s know-how in several areas of medicine, and will be happy to reciprocate by contributing to Hadassah’s work in that specialty”.