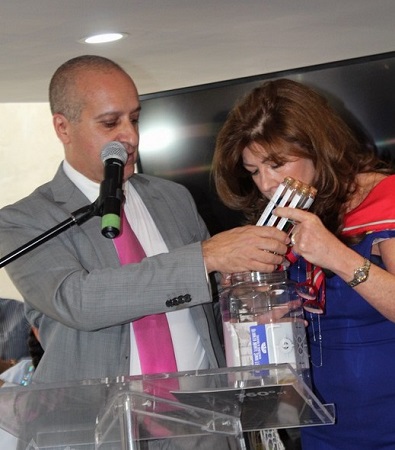 The Monte Sinaí Community of Mexico, comprised primarily of Jews of Damascus origin, have taken Hadassah into their hearts and made it an important part of their lives.

This summer they invited Hadassah to help them celebrate a tradition of passing treasured memories and traditions on to the next generation. Every 24 years, each family in the community is asked to create a time capsule that represents what is important for them personally at that point in time. All the capsules are then sealed in a vault, to be opened in 24 years’ time.

Fainstein and Diener chose to place test tubes in the Hadassah capsule, to represent Hadassah’s research in service to humanity (see photo above).

As a part of the week-long Monte Sinaí Community celebrations, the Director General of the Hadassah Medical Center, Prof. Zeev Rotstein, was invited to come to Mexico City to meet the community. A large audience, many of them with friends and relatives who are ill, listened carefully as Professor Rotstein told them about the exceptional research that Hadassah is doing to combat life-threatening diseases such as Leukemia, Multiple Sclerosis, Melanoma, Parkinson’s and Alzheimer’s.

The Monte Sinaí Community of Mexico, which recently returned from a Keren Hayesod mission to Israel to dedicate the PICU at Hadassah Ein Kerem, believes in and supports the work of Hadassah. Hadassah is a part of their present and their future.