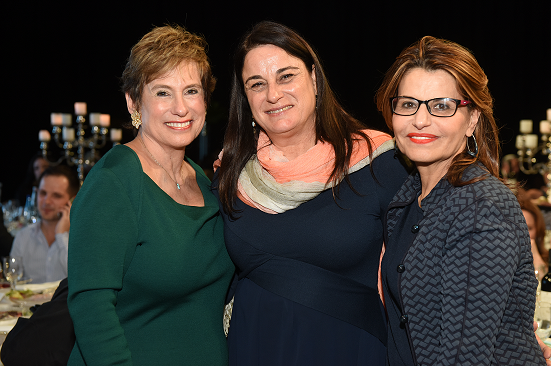 The importance of Hadassah Hospital in healing, research and medical education drew 500 Israeli supporters of the capital’s largest medical center for an evening of recognition and support. A new grouping of supporters, Hadassah International Israel, held its first Gala dinner at the Hilton Hotel in Tel Aviv on November 19, in the presence of Minister of Health Yaakov Litzman, National Hadassah President of Hadassah Marcie Natan, incoming National President Ellen Hershkin, Chief Rabbi David Lau,  and incoming Hadassah Hospital Director General Prof. Zeev Rotstein. Leaders in Israeli society, including prominent persons in  business, technology and academia, gathered to show their appreciation of Hadassah and to help facilitate the hospital’s growth.

“Hadassah is the jewel in the crown of Jerusalem,” said Minister Litzman.

“Hadassah is also the Iron Dome of Israel’s Health System,” added Natan Barak, CEO of Mprest, developers of the Iron Dome anti-missile system. His talk about the Iron Dome was among the highlights of the evening, which included an award to Rona Ramon, in memory of her late husband Israeli astronaut Ilan Ramon, and a briefing by Ambassador Michael Oren.

Dvir Mossai, 26, who stepped on a mine 13 years ago when he was on a class trip picking cherries, thanked Hadassah for restoring him from devastating injuries to a young man who served in the anti-terror unit of the IDF, who married the love of his life, and today is a father of a little boy.

The fundraising goal of the evening was the purchase a new PET/CT scanner, an important tool in diagnosis and treatment of cancer.  Hadassah International Israel has committed to providing the most technologically advanced system for the thousands of patients in Hadassah’s Sharett Oncology Center. More than $300,000 of the cost was raised at the Gala Dinner.

A young woman with children told of her cancer diagnosis and the 6 months of chemotherapy that she had endured. Her struggle and her remission were made possible thanks to the level of diagnosis made possible with a CT scanner. She told how important it was for her to be able to see the disease she was fighting on the screen. A moment of recognition of the recent terror attacks in Paris was made more poignant by the presence of Hadassah France President Professor Emmanuel Messas, a physician who works in Paris. He announced a gift of $50,000 from Dr. Sydney Ohana, his predecessor as President of Hadassah France. Also arriving from Europe was Hadassah Switzerland President Sacha Wigdorovits.

An additional moment of recognition was the standing ovation given interim hospital Director General Prof. Tamar Peretz who shepherded the hospital through the last year and a half. Guests also heard presentations from Ambassador Michael Oren and Prof. Dan Gazit.

The evening’s costs were donated by the family of Motti Ganz, Chairperson of the Diamond Exchange and member of the Hadassah International Board. Other board members present included Chairperson Sally Oren, President of the Hadassah International Israel Board of Trustees; Avraham Novogrozky, CEO of Africa-Israel; Joe Schewebel, Owner of Zara & Gap Israel; Avraham Kuznizky, Chairman & Owner of Minrav Company; Dalia Itzik, Speaker of the 17th Knesset; Dan Koller, Deputy CEO of Bank Hapoalim; Yigal Marcus-CEO of Bernstein Israel, Matan Caspi, CEO of Rayson Group; Dafna Fisher; and George Rosenberg. This impressive list of guests demonstrated the interest of the Israeli business community in Hadassah’s “avant-garde” medical research and care for all.

“It is a privilege to serve such a distinguished Board,” said Meir Mark, Director of Hadassah International Israel.

Board Member Eli Wagner who also serves as the Chair of the Board of Meir Shfeyah, an Hadassah Youth Village, invited a table of Youth Aliyah students, many of whom are from trouble spots in the world without their parents. Tenor Sasha Rozbizev, one of Wagner’s guests, sang popular Israeli music and an opera selection. Other musical entertainment was provided by Israel megastar Danny Sanderson.

Chairman of the Board of the Hadassah Medical Organization, Erez Melzer, and Hadassah hospital administration and physicians were among the attendees, including Ein Kerem Director Prof. Yoram Weiss, Mount Scopus Director Osnat Levzion-Korach, Head of Research and Development Prof. Eyal Mishani, and Director of Pediatrics Prof. Eitan Kerem.

A wonderfully elegant, seated dinner took place in the ballroom, which was stunningly adorned by a mixture of tall vases of white roses and chand Throughout the program, guests heard from patients and doctors – stories about the miracles done every day at the hospital.

For all the participants in this pioneering Gala event, this evening was an extraordinary story, the story of how the Israeli society came on board to be partners in continuing to build Hadassah as one of the pillars of the Israeli health system.

Please see the Hebrew article about the evening in Globus at http://www.globes.co.il/news/article.aspx?did=1001083130

Please see interview with Prof. Emmanuel Messas on Israeli TV (In Hebrew) about the situation in France. https://youtu.be/_tAGBPwpueo