Hadassah Kicks Off Breast Cancer Month With Insights From Experts 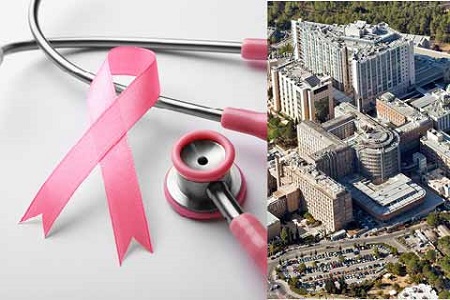 Titled “2020 Insights on Breast Cancer,” the webinar highlighted the importance of genetic screening for mutations that predispose women to breast cancer, advances in early detection, new personalized treatment options for those with triple-negative breast cancer, and types of reconstructive breast surgery.

Dr. Luna Kaduri, head of Hadassah’s genetic cancer services, noted that “genetic testing has become part of the evaluation of all breast cancer patients.” She reported that younger age of onset and several cases of breast cancer in the family suggest a genetic predisposition. Dr. Kaduri emphasized that men should be tested, too, because BRCA mutations are associated not only with increased risk for breast cancer but also an elevated risk of melanoma and pancreatic, prostate, and colon cancer. In addition, men can pass the BRCA gene on to their offspring.

Hadassah’s Sharett Institute of Oncology has a multidisciplinary clinic for people at high risk. It is staffed by oncologists, radiologists, gynecologists, oncologic surgeons, and plastic surgeons.  At this one-stop clinic, Dr. Kaduri said, a woman can have all necessary screenings, consultations, fertility preservation procedures, preventive surgeries, and hormone replacement therapy. Hadassah advises all women who think they would like to have children or additional children to go for a fertility preservation consultation, since chemotherapy may damage a woman’s ovaries and cause infertility. As Dr. Kaduri noted, Hadassah offers all women fertility preservation before chemotherapy, either preserving their eggs or a fertilized embryo.

Typically, Dr. Kaduri and her colleagues begin seeing high-risk women at age 25. They start with genetic testing and annual breast MRIs and ultrasounds on alternate years. Men are seen beginning at age 35.

Prof. Beatrice Uziely, head of Hadassah’s oncology ambulatory services unit, explained that liquid biopsies are enabling cancer specialists to detect cancer earlier. This cutting-edge tool uses either dying cancer cells or fragments of tumor DNA that are circulating in the blood to identify cancer. The biopsy also helps to evaluate a treatment’s effectiveness based on the number of killed cells.

Osnat, one of Prof. Uziely’s patients and a breast cancer survivor, shared her story with webinar participants. Going public about her illness for the first time, she related that her mother was diagnosed with breast cancer at age 65. Both Osnat and her sister have the BRCA1 mutation. Their mother? No. They inherited the mutation from their father. Osnat’s sister contracted breast cancer at age 35. At age 46, Osnat, still cancer-free, decided to have her ovaries removed, but she could not bring herself to have a prophylactic mastectomy. In June 2019, at age 61, her MRI showed an abnormality. Following a biopsy, she learned she had triple-negative breast cancer. She was treated with both chemotherapy and experimental immunotherapy by Dr. Uziely and an oncologist in Bern, Switzerland, where she has been living with her husband, Jacob, Israel’s Ambassador to Switzerland. Dr. Uziely consulted with her local oncologist, and they agreed that Osnat would follow Hadassah’s treatment protocol. When it was time for Osnat’s second round of chemotherapy, Dr. Uziely came to Bern to be with her. In July of this year, Osnat was declared cancer-free.

For many women with triple-negative breast cancer, the prognosis has been bleak. But Hadassah oncologist Dr. Ofra Maimon explained that new research is revealing possible paths to treatment. “We now know,” she said, “that overexpression of the PD-L1 protein is a culprit in this form of cancer.” Therefore, she and her colleagues are using an experimental treatment to inhibit PD-L1 expression. Treating patients with this kind of immunotherapy, combined with chemotherapy, she reported, “improves outcomes dramatically.” Dr. Maimon reported that they are also using a new drug called a PARP inhibitor that, by blocking certain molecular pathways, leads to the death of these cancer cells, or “synthetic lethality.”

Dr. Neta Adler, director of Hadassah’s Service for Breast Reconstruction and Microsurgery, related that when breast cancer patients undergo a mastectomy, breast reconstruction typically follows at the time of the surgery. She noted that two-thirds of breast reconstructions involve silicone implants. The other reconstructions are autologous, where tissue from the patient’s lower abdomen or back is removed and shaped into the breast tissue. When patients have a lumpectomy, Dr. Adler said, breast conservation surgery can be performed to eliminate breast distortion. “This practice led to a new concept,” Dr. Adler noted, whereby “all breast surgery would be oncoplastic, that is, “all cosmetic breast surgery would take into account its oncologic implications, and any oncologic procedure would consider its cosmetic implications.”

One of the most uplifting segments of the webinar was a video of Aya, a patient of Dr. Kaduri. Aya, a new mother, was diagnosed with breast cancer at age 24. “I realized I could get sucked into the mire and drown, or I could pick myself up, raise my head, and cope,” she said. It has now been 10 years, and Aya is cancer-free. Thanks to a surrogate, she has a second daughter. “There is life alongside cancer,” she said. “You can continue to dream, to work, and to be fulfilled; you can raise children, and you can live a full, routine life.”

Watch the event below:

*Due to a technical glitch, we were unfortunately only able to record the first 40 minutes of the presentation. We apologize for this error.