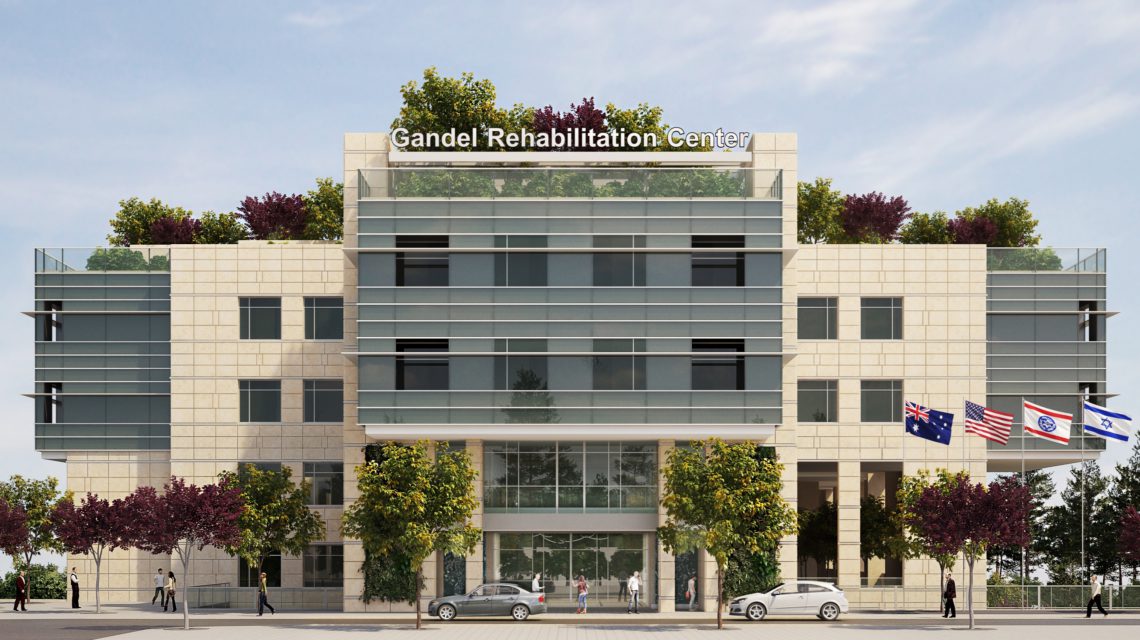 Hadassah International, Hadassah Australia, Hadassah Medical Organization (HMO), and Hadassah, The Women’s Zionist Organization of America, Inc. (HWZOA), are delighted to announce a transformative gift from Gandel Foundation, led by John Gandel and Pauline Gandel of Melbourne, Australia, for the signature naming of the Gandel Rehabilitation Center at Hadassah Hospital Mount Scopus in Jerusalem. Scheduled to open in early 2023, the Gandel Rehabilitation Center will bring hope, recovery, and a greatly improved quality of life to thousands of patients needing medical rehabilitation for disease, illness, or injury right across Israel.

This pioneering contribution to the Hadassah Medical Organization, for the benefit of the people of Israel, was facilitated by Hadassah International, the international affiliate of HWZOA.

The Gandel’s contribution represents the largest single donation in Hadassah International’s worldwide fundraising history. It serves as a testament to the vision, generosity, and philanthropic leadership of John and Pauline Gandel, both recipients of the “Companion of the Order of Australia” award (AC), the highest civilian honor in Australia, bestowed for their outstanding achievement and service to Australia and humanity at large.

On announcing the landmark gift, Mr. John Gandel and Mrs. Pauline Gandel said: “Our philanthropy in both Australia and Israel is about creating a positive and lasting difference in people’s lives, and what better way to achieve that, than through enabling the best medical and rehabilitation care for disease or injury, for anyone who may need such help. We are incredibly proud to be involved with this strategic project which we know will, for the first time, provide a vital, first-class rehabilitation service and treatment. We are confident the Centre will benefit not only the people of Jerusalem but the whole of Israel, and it will help improve the quality of life of countless individuals and their families. We congratulate Hadassah and the State of Israel on this critical initiative and we are only too happy to be a part of this truly wonderful, momentous development.”

Defined by the Israeli government as a priority strategic project, Hadassah International and Hadassah Australia have adopted the US$100-million-plus Rehabilitation Center at Hadassah Hospital Mount Scopus as a signature fundraising project. The greater Jerusalem area, with over 1.2 million people, is the fastest-growing urban area in Israel and has the highest proportion of elderly residents in all of Israel.

Jerusalem is in dire need of rehabilitation facilities for disease, illness, or injury, with residents forced to travel long distances for treatment, often facing extensive delays which impact their chances of recovery. Recognizing the shortage of adequate and modern rehabilitation services in Jerusalem, the Government of Israel has partnered with Hadassah to help fund this once-in-a-generation project. Now, in a truly inspirational act of generosity, John and Pauline Gandel and their family have stepped up to add their substantial backing for this unique and significant contribution to the City of Jerusalem, a contribution that will transform lives.

Dalia Itzik, Chair of the HMO Board of Directors and former Knesset Speaker, stated: “I am proud to be spearheading the establishment of this lifesaving rehabilitation center. It will be one of the most impactful and vital institutions in Israel – ensuring that anyone who needs the best treatment in the world will be able to get it right here in Jerusalem. Thanks to the historic support from John and Pauline, we can truly say that the Gandel Rehabilitation Center will be ‘Australia’s gift to Israel’”.

Dr. Tamar Elram, Director, Hadassah Hospital Mount Scopus, said: “The Gandel Rehabilitation Center is one of the most important projects being undertaken in Israel today. Lives will be changed for the better because of the care it will offer. I am honored and proud to be part of the leadership of Hadassah Medical Organization and the Mount Scopus campus”.

Currently, at an advanced stage of construction, the Gandel Rehabilitation Center is an iconic, 21st-century building located adjacent to the historic Hadassah Hospital Mount Scopus in the very heart of Israel – a magnificent eight-story, 20,000 square-meter modern world-class rehabilitation facility.

This remarkable donation to Jerusalem from the Gandel Family will enable those recovering from serious accidents, illness, and disease to rebuild and live productive independent lives. Those whom the center will serve includes some of the most vulnerable people in Jerusalem – the elderly, sick, injured, wounded, and victims of terror.

Rhoda Smolow, National President of Hadassah, The Women’s Zionist Organization of America stated, “We are truly grateful for this magnanimous gift. We are extremely proud that this state-of-the-art rehabilitation center will serve not only the residents of Jerusalem, but all those seeking its services focused on healing for all and improving the patients’ quality of life, regardless of race, religion, or nationality”.