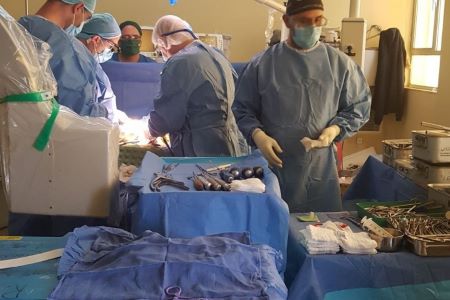 March 6, 2022 —Tomorrow, the Hadassah Medical Organization will send an emergency delegation to southern Poland, where Ukrainian refugees are streaming across the border by the tens of thousands. The four-person delegation will travel to the Medical University of Lublin, the city’s largest hospital and just 70 miles from Poland’s southern border. They will share their experience with the local medical teams in how to triage trauma patients and work with the Lublin hospital to assess the resources and personnel that will be needed to treat the Ukrainian refugees, whose swelling numbers may soon stretch the hospital’s capacity to its limit. To date, 500,000 to 700,000 of an estimated 1,000,000 Ukrainian refugees have fled to Poland.

Ukrainian Ambassador to Israel Yevgen Korniychuk has expressed his gratitude to Hadassah for its efforts on Ukrainians’ behalf.

The Israeli doctors bring with them an intimate knowledge of wartime medicine and the physical and human infrastructure needed to handle sudden large influxes of patients. That hard-won expertise comes from treating countless fellow citizens injured in war and terrorist attacks.

The Hadassah team is made of experts in different areas, such as general surgery, trauma, orthopedics and internal medicine.

The mission is part of a joint humanitarian effort launched last week by the Hadassah Medical Organization, Hadassah International and Hadassah, The Women’s Zionist Organization of America. At the request of the Foreign Ministry of Ukraine, and thanks to contributions from generous supporters, the Hadassah Medical Organization donated $25,000 in medical supplies, which were airlifted to the Polish border with the help of the Ukrainian Embassy in Tel Aviv. Hadassah’s two hospitals are ready to treat Ukrainian refugees who are airlifted to Israel. All three organizations have launched fundraising campaigns to support this important endeavor.