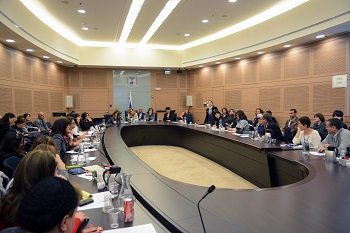 Thanks to advocacy by the Hadassah Medical Center’s Linda Joy Pollin Cardiovascular Wellness Center, women’s heart health took center stage in Israel’s Knesset, with a special hearing in its Committee for the Status of Women and General Equality.

Following a compelling session in which experts and patients spoke passionately about the need for raising awareness about women’s heart health, Committee Chair MK Aliza Lavie charged the Ministry of Health to create a coalition immediately to advance awareness of women’s unique heart issues, both among women, as well as health care givers. “In the United States, since the “Go Red” initiative for women’s heart health in 1997,” related Dr. Donna Zfat-Zwas, Director of Hadassah’s Pollin Center, “the numbers of women dying from heart attacks has fallen. We are thrilled that the Knesset has demanded a nationwide campaign from the Ministry of Health.

“We have to investigate why more women die of their heart attacks than men,” continued Dr. Zfat-Zwas, “but we’re speculating that women who have heart attacks have more hypertension, more diabetes, and more kidney problems than men who are admitted with heart disease.”

Representing Haredi women, who are at higher risk for heart attack than other groups, Rachel Thaler of Jerusalem described how she ignored chest pain for months before having a full-scale heart attack. “If women in the general sector are not aware of the risks of heart disease,” she brought out, “this is even more so among women in my sector, who have large families and are the main breadwinners.”

The Pollin Center has initiated community outreach programs in Haredi neighborhoods, as well as Arab localities, since Arab women are also at higher risk.  Click to read more about the Pollin Center. Status of Women and General Equality.