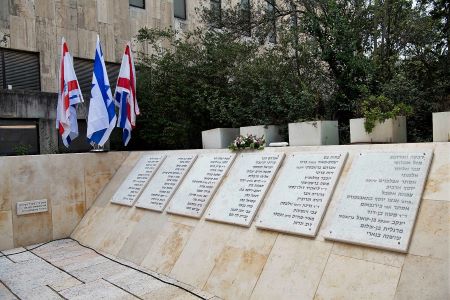 Although it happened 74 years ago this month, the April 1948 attack on the Hadassah medical convoy making its way from Jerusalem to Hadassah Hospital Mount Scopus, leaving 78 women and men dead after a day-long siege, is never far from the minds of our hospital personnel.

This year the ambush was marked by a wreath-laying ceremony last week in the hospital’s memorial garden, where a plaque lists the names of those killed that day.

The road leading up to the hospital was short—just three miles—but ran through hostile Arab sections of town. As the convoy’s 10 vehicles approached the Sheikh Jarrah neighborhood, a bomb exploded, sending the lead truck into a ditch. Half the convoy was able to turn around and escape. The remaining vehicles, including two buses, were trapped and attacked from both sides of the road. British soldiers assigned to protect the clearly marked medical convoy were absent, and throughout the many hours of the attack, none came to the rescue. Among the dead were Dr. Haim Yassky, the director of the hospital, and 77 other hospital personnel, students, and soldiers.

Among the speakers at this year’s commemoration was Shooky Levanon, who was just two years old when his father, Zvi Levanon, a technician at Hadassah, was murdered. Sections of Levanon’s book describing his father’s death were read aloud. “Help has to come,” Zvi Levanon was reported as saying. But it never arrived.

Hadassah Mount Scopus Director Dr. Tamar Elram spoke of her pride in being a Jerusalemite and heading a hospital that delivers the best medicine possible to the people of Jerusalem.

Jerusalem’s Deputy Mayor, Elisha Peleg, stressed that the convoy taught Israel that it cannot rely on others to defend it. It must always be able to defend itself. Speaking of the dead, he said, “They have not died in vain.”