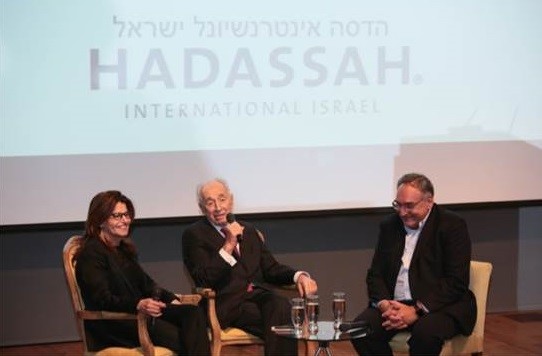 Our hearts ache in sorrow as we mourn the death of past Israeli President and Prime Minister, Shimon Peres.

Hadassah has lost more than a powerful senior statesman and peace-maker who dedicated his life in service to the Jewish State.

We have lost more than a strong defender of Israel, a winner of the Nobel Peace Prize and a father of the Oslo Accords, a past prime minister and president.

We have lost a friend. We have lost a powerful voice, the sound of which always resonated deeply within us. We have lost a Hadassah Henrietta Szold Humanitarian Awardee, who many of us were so proud to have represent us, and the Jewish people.

May his family find solace in his memory and his legacy.

In February 2016 Peres met with Hadassah International Israel leadership, and emphasized the importance and distinctiveness of Hadassah Medical Organization, and the contribution of Hadassah supporters around the world in creating such an outstanding medical center.

“No institution models a place of complete peace under the most demanding circumstances more than Hadassah” Peres once said. Through the “Save the Children” project of the Peres Center for Peace, the Hadassah Medical Center’s physicians not only perform complex cardiac surgeries on Palestinian children, they also train Palestinian physicians so that they can treat Palestinian patients closer to home. (See video of the Hadassah Medical Center treating children who arrive at Hadassah  through the Peres Peace Center). .

Shimon Peres’ Save the Children project has saved over 5,500 children, and built long lasting bridges to peace”.

As we hold close his memory, we must do all we can to support and defend the Jewish State that Peres helped build. “We are best,” Peres once told a Hadassah gathering, “when we work together, motivated to lift up the lives of others.”

May his words guide us now that he is gone and may his memory be a blessing.

PS: View our photo album of Hadassah and Shimon Peres through the years.