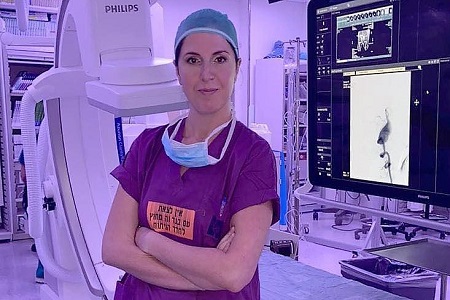 Members of the Israeli Forum of Resident Doctors have voted Hadassah Medical Organization neurosurgeon Dr. Lea Kahanov as their new chief. It will be her role to fight for residents’ rights.

Born in Nizhny Novgorod, a city in western Russia, she chose a career in medicine “because of all those great TV episodes of ER.” Kahanov notes, too, “When I was young, I cared for my grandfather, who had ALS.”

Before becoming a doctor, Kahanov was a nurse, a graduate of the Henrietta Szold-Hadassah Hebrew University School of Nursing. Two months after earning her bachelor’s degree in nursing, Kahanov began her medical studies in Moscow. To make ends meet, she worked in security for El Al and at the Israeli Embassy.

On her return to Israel, she passed her medical examination, and, after a year as an intern and three months of volunteering as a physician in Uganda, she joined Hadassah’s Department of Neurology as a resident. That was in November 2016. Kahanov will be close to 40 years old when she is able to call herself a full-fledged neurosurgeon.

“I don’t mind that I’m still a student. It’s a lot of fun,” Kahanov says, just before picking up her toddler son Nadav from Hadassah’s “amazing” kindergarten. “I have lots of support from my partner, and my mom often helps out too, so, as a woman, I can really focus on my studies and practicing medicine in what is a very demanding field.”