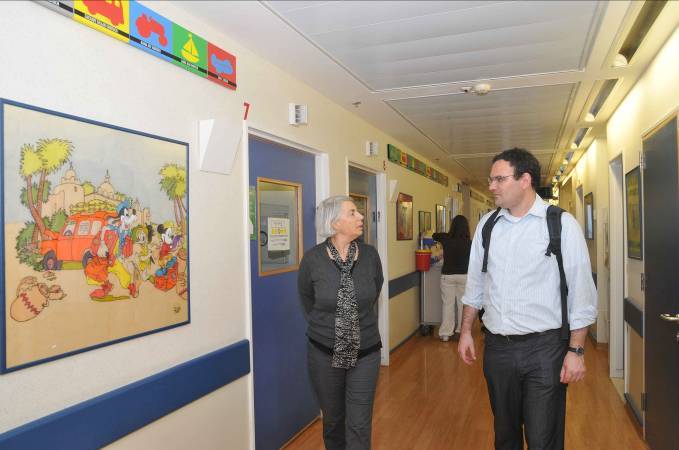 Clinical Psychologist Ben Sedley, Hadassah New Zealand Valda Knight Memorial Scholarship recipient for 2009, returned from his clinical experience at the Hadassah Medical Center “impressed by the clear procedures put into place following a traumatic event, whether a terrorist attack or motor vehicle accident.” He also admired “the staff’s ability to work effectively with children and young people from so many different ethnicities and backgrounds.”

The teams he encountered, Dr. Sedley relates, “were able to offer therapy in Hebrew, Arabic, Russian, French, and English.  The inpatient unit ran therapy groups comprised of Jews and Arabs, ultra-Orthodox and secular Jews, and immigrants from all around the world.”

“I really enjoyed talking to the staff about how they are able to develop empathy with people from wildly different political views,” he relates, “–for example, a Jewish staff member and a Palestinian patient the day after a bus bombing, or a Palestinian psychiatrist working with Israeli families the day after being harassed by soldiers at a border crossing. None of the staff I spoke to found it difficult to separate people and politics. As Dr. Ben-Harosh said, all politics are left at the door and all clients are just people experiencing difficulties.”

Established in memory of Valda Knight, president of Hadassah New Zealand from 1996 until her death in 2007, the scholarship provides New Zealand health sector workers with an opportunity for professional development and comparative study at Hadassah. It is funded by the Knight Family Trust. Dr. Sedley, who holds a Ph.D. in children and “young people’s understanding of mental illness,” works primarily with adolescents experiencing difficulties with depression, anxiety or family issues.

He reports that he admired the flexibility Hadassah illustrates in meeting the therapeutic needs of each patient beyond dealing with the trauma incident. Hadassah has an effective screening process, he notes, which identifies those young people who are more likely to develop post-traumatic stress symptoms. Its health professionals ensure that the families are aware of what type of symptoms to watch for and who to contact if they see them materializing.

Dr. Sedley worked in London in 2008 at the West London National Health Service as part of the Cognitive Behavioural Therapy Team, offering his services to adults who were depressed or anxious as a result of trauma. He also worked in Jerusalem as a youth counselor.

When asked what he would like others to know about the Hadassah Medical Center, Dr. Sedley said:

“The Hadassah Medical Center is a world-class institution with state-of-the-art medical and psychological services. Its wards and facilities are designed to be able to withstand terror attacks and cope after horrific tragedies, yet at the same time, it is a friendly environment designed to make a patient’s hospital visit as pleasant as possible.”