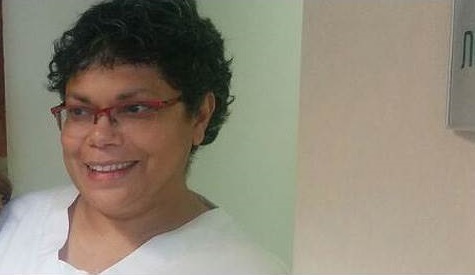 “Because cancer treatment is prolonged, I become part of each family,” says Hadassah Medical Center Oncology Nurse Specialist Smadar Gadassi, whose parents hail from Cochin, India.  The youngest of seven siblings, she lives in Karmei Yosef, a village near the airport in Lod.  Her nine-year-old daughter attends school in Neve Shalom, the only Arab-Jewish village in Israel.

Mrs. Gadassi, who has been a nurse for 25 years, was born in Israel, grew up in Haifa, studied at Hadassah, and worked in the Intensive Care Unit at Hadassah-Mount Scopus for 18 years. For the past five years, she has been working in Hadassah’s oncology day care center. Her patients are a mix of Jews and Arabs, religious and not-so-religious. Many of her patients are women who have breast cancer.

“For example, I have become very close to an American born, ultra-orthodox patient whose breast cancer was discovered when she was nearing the end of her fourth pregnancy,” Mrs. Gadassi says. “She and her husband, who always accompanied her wearing his big fur hat, were the most open people. We began chemotherapy when she was still pregnant. The boy who was born is now three. She is still getting treatment every month. We are in touch every few days because we have become so close.”

“About 30 percent of our patients are Arabs,” Mrs. Gadassi reports. “One woman from Gaza  with metastatic breast cancer,” she relates, “always gets to us close to the end of the day and needs to be treated immediately because she wants to get back to the border crossing before seven p.m. I make sure everything is ready before she gets here. We never know if she has the correct referral from the Palestinian Authority. Politics sometimes get in the way on that side. I’m always so relieved to see her that we hug in relief before the treatment starts. I speak some Arabic and sometimes she has a relative accompanying her who speaks a little English, so we get by. We’re not only treating cancer, trying to use the most advanced methods in the world, but we’re also dealing with the multicultural and complicated political environment of our region.”

In April, Mrs. Gadassi will be coming to the United States to take a two-week in-service course in the oncology care unit of the Hospital of the University of Pennsylvania in Philadelphia, with the goal of gathering ideas to improve oncology day care at Hadassah. This exchange opportunity is being supported by a nursing scholarship fund, endowed with Hadassah in America.