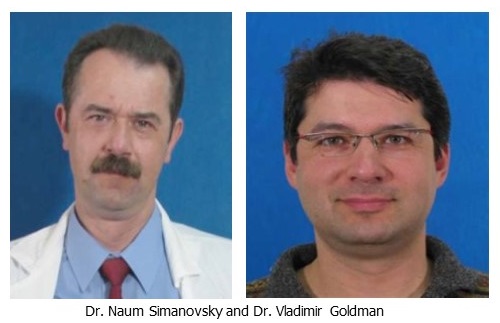 At age 14, Sonya Arenstein immigrated to Israel on her own from Donetsk, a war-torn part of the Ukraine, and was given a home in the Meir Shfeya Youth Village, supported by Hadassah in America.

After graduation from school, she volunteered in Israel’s National Service, including an extra year working with troubled teens in Netanya. Now she’s 19 and looking forward to two years of military service, but her hip pains, which have been troubling her throughout her life, have been getting worse. The casts her legs were put it when she was an infant in the Ukraine and the surgery she underwent there when she was 13 proved unsuccessful. Her local physicians in Israel could not come up with a solution either.

The house mother at Meir Shfeya thought maybe the Hadassah Medical Center physicians could help Sonya and made a phone call to the hospital and got her an appointment.

The orthopedists at Hadassah Hospital Ein Kerem diagnosed her problem as a malformed and deteriorating hip joint. The remedy for her condition required a team of sophisticated surgeons and a hybrid operating theater. Hadassah, the only orthopedic department in the Middle East that belongs to the prestigious International Society of Orthopedic Centers, had both.

“The staff jokingly call me ‘Hadassah Woman,’ because they know that Hadassah women made the connection,” related Sonya from her pre-op hospital bed in the Sarah Wetsman Davidson Hospital Tower.

“As long as I can remember, my legs were different lengths,” Sonya recalled. “Playing sports was always painful, but I love tennis and swimming. When the pain would overwhelm me, I would close my eyes, take a deep breath, and do my best to continue playing.”

Inside the hybrid operating room, a large team had assembled. In addition to Hip Surgeon Dr. Vladimir Goldman (on right), who heads the limb lengthening and correction service at Hadassah, Dr. Naum Simanovsky (on left), a pediatric hip specialist, was present.

The surgery began with the rebuilding of the misshapen head of her femur, the long bone that fits into the pelvis. “We need three-dimensional imagery to see if we are doing it exactly right,” Dr. Goldman explains. “It has to be shaped perfectly to fit into the hip joint.” Then, the pelvis itself needed to be reshaped. The top of the pelvis, which forms a roof, needed to be lowered so the hip would be flexible.

“You use your hands and eyes, but there is no replacement for the level of exactness you can get using three-dimensional imagery during the surgery,” Dr. Goldman says.

The surgery took over four hours. “I couldn’t have done this myself, without the team,” relates Dr. Goldman. “When you work with experts like Dr. Simanovsky, it stops you from making any mistakes. We consult each other for each move.”

Dr. Goldman, who immigrated to Israel from the former Soviet Union, speaks Russian, and has been able to keep Sonya’s mom abreast of what was going on.

Sonya’s prognosis is excellent. “She should have full use of her hip,” Dr. Goldman reports. “She will now be able to serve in the Israel Defense Forces and play tennis.”

Recuperating in her private hospital room on the fifth floor of the Sarah Wetsman Davidson Hospital Tower, with friends from her volunteer job in Netanya sitting on one of the day beds, and special food treats from the women of Hadassah on her tray, Sonya says, “I can’t thank you enough for changing my life. Meir Shfeya is my home and Hadassah is my family.”

Sonya will spend the next few weeks back at her Youth Village, where a doting staff is waiting to take care of one of their beloved graduates.