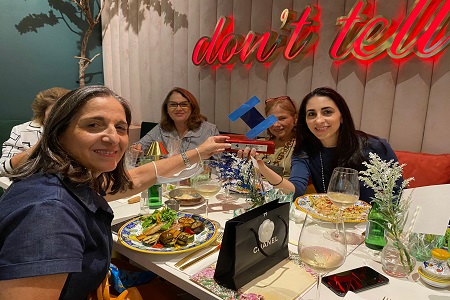 To honor the outgoing leadership, Bianca Levy organized an emotional farewell event where Raquel Btesh was presented with a plaque from Hadassah International in recognition of all the work she had done over the years. (See the main picture). As her first act as new President of Hadassah Panama, Bianca Levy organized a special event to recruit and engage new young leaders to create a board for the new Hadassah Panama. Twenty young couples, including investors, philanthropists, and Zionists attended the event, (see picture on the right) and have already started working on an innovative plan to start vibrant new activities for Hadassah in Panama.

Jorge Diener, executive director of Hadassah International, visited Panama for a few days to be part of this transition and participated in both events.

During his visit to Panama, Jorge Diener was also invited to the *Shloshim of Margie Mizrachi Z”l, the first President of Hadassah Panama, who had recently passed away. Represented by Jorge, HI paid tribute to her at the synagogue in Panama City. (See picture).

An active supporter of Hadassah Panama, Margie Mizrachi was devoted to Hadassah, and over the years had contributed greatly to the development of Hadassah Hospital. Her active role in the Sarah Wetsman Davidson Hospital Tower campaign and the funding of the Panama Auditorium in Hadassah Hospital Ein Kerem embodied Hadassah’s mission to improve lives. The community campaign that funded Panama Auditorium in the name of Rabbi Zion Levi has enabled Hadassah Medical Organization (HMO) to organize many conferences and international seminars.

*A Shloshim is a special commemoration ceremony 30 days after the death of an individual.