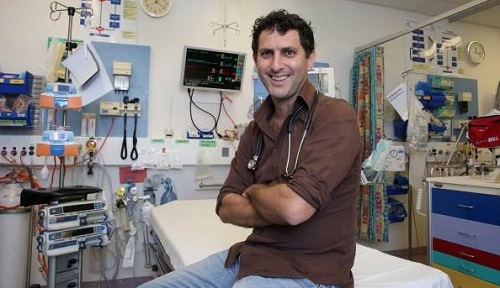 Doctor Saar Hashavya, Head of Pediatric Emergency Services at Hadassah Ein Kerem Hospital, will next month complete a year-long fellowship in pediatric emergency medicine at the Sydney Children’s Hospital. He shares his reflections on the experience with Phoebe Roth of the Australian Jewish News.

Hashavya is in Australia to gain expertize in the Australian Emergency Room procedures that he will take back to Hadassah.

His fellowship has been made possible by funding from a family foundation, administered through AUSiMED (Australia–Israel Medical Research), an organization which supports medical research initiatives that benefit Australia, Israel and the global community.

Ron Finkel, President of both AUSiMED and  Hadassah Australia, notes that AUSiMED is not linked to any one institution. He says these sorts of exchanges respond to identified gaps in some aspect of health care in Australia or Israel.

“The teamwork and the higher level of organization in the Emergency Room is something which I like here very much and which I think should be implemented in Israel in Hadassah”, says Hashavya.

Having worked at Hadassah Hospital since he first qualified as a doctor, Hashavya has much to say about the world-renowned institution.

“Hadassah is taking care of all the population in Jerusalem. Which means Muslims, ultra-Orthodox Jews, secular Jews, Christians … it’s a very multicultural experience. And I think it’s like a safe-haven in this crazy Middle East,” he says.

He notes that something people often aren’t aware of is the fact that 40 per cent of the staff at Hadassah are Muslim and Palestinian. The patients, too.

“I think it’s something people don’t understand. They’re very used to the conflict. And this is what the media usually shows. But they are not used to the fact that Hadassah is very unique in that everybody is working together. Everybody is getting treated the same. Regardless of where you come from.”