Hadassah CubaNews from Our Units23 December, 2016 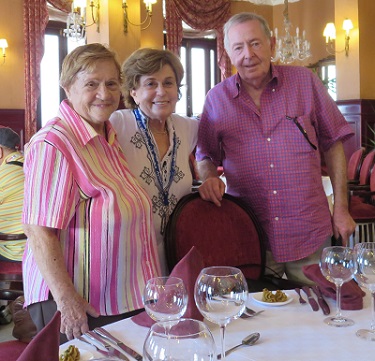 From December 4 to 11, 2016, forty Hadassah volunteers from 13 states in the USA travelled to Cuba on a Humanitarian Mission.  The purpose of the trip was to visit 4 Jewish communities and take them much needed supplies. These included over-the-counter medications such as: aspirin, baby aspirin, Tylenol,  Pepto-Bismol tablets, antacids, Benadryl, eye drops, antiseptic cream, cold and flu meds; adult size underwear for men and women, hygiene products, diapers, and toiletries, such as soaps, small shampoos, deodorant, toothpaste. In total this group divided 62 bags of supplies among the 4 communities and the Hadassah International Pharmacy at the Patronato.  Dr.Rosa Behar is President of Hadassah International Cuba and manages the Pharmacy that services Jews and all others in its neighborhood.

The group also explored the art scene, enjoyed Cuban music, visited the National monuments, and drove 6 hours to Trinidad, a city established in 1514 and a UNESCO World Heritage Site.  Throughout the trip they learned about Cuban society and what life is like in Cuba today.  Since tourism has opened up a bit, they were able to enjoy many great dining experiences in a variety of settings.

One highlight for participants was the opportunity to attend Shabbat services at the Patronato, where they discovered that the Cuban community sings some of the same melodies that are used in the US. On Shabbat, Dr. Stephen Berk gave the group an outstanding hour long lecture (with no notes) on the history of Cuba. Late on Saturday they returned to the Patronato Synagogue for a Havdalah service and a dance recital by the students. They were then driven in old taxi cab convertibles for a night time view of Havana. The cars are almost all from the United States, and age from the 1940’s to the late 1950’s. The bodies are in remarkably good condition, with replaced engines.  One man told the group that his car, a 1956 Chevy had a Yugo engine!