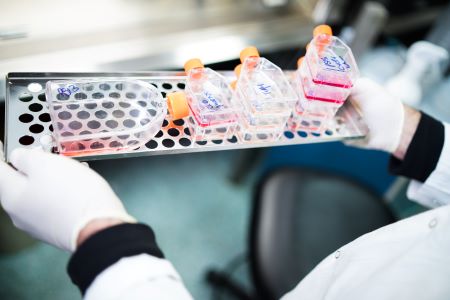 Hadassah Researchers are the first in the world to derive male and female cells from the same person. This breakthrough opens the path to new discoveries in the study of sex differences and the development of gender medicine.

Researchers at Israel’s Hadassah Medical Organization have created the world’s first human male and female cells with the same genetic code from the same person that differs only in sex chromosomes. The unique model opens the path to new discoveries in the investigation of sex differences and the development of gender medicine. The results of the study, “Modeling Sex Differences in Humans Using Isogenic Induced Pluripotent Stem Cells,” appear in the latest issue of the Stem Cell Report, the journal of the International Society of Stem Cell Research.

Since stem cells can mature into any cell in the human body, the new model allows for a clear laboratory demonstration of gender differences. This will make it possible to study differences between the sexes in all types of cells and to understand whether the cause of a difference is the composition of the sex chromosomes or the difference in the hormonal profile.

The study’s lead researcher was Benjamin Reubinoff, MD, Ph.D., a pioneer in the field of embryonic stem cell research. Dr. Reubinoff is Director of the Sidney and Judy Swartz Stem Cell Research Center at The Goldyne Savad Institute of Gene Therapy at the Hadassah Medical Organization in Jerusalem and Senior Physician in the medical center’s Department of Obstetrics and Gynecology.

Said Dr. Reubinoff: “This is a breakthrough in the field of gender medicine. The world of medical science today recognizes the great importance of the differences between women and men. The National Institutes of Health in the U.S. has changed its policy in recent years, now requiring that all medical research that it funds be conducted on both sexes equally.” He continued, “The unique stem cell system we have developed will lead to new discoveries about gender differences, can help compare the efficacy and toxicity of drugs, and can contribute to the development of better medicine adapted to men and women.”

In recent years, there has been a growing understanding that gender differences can affect health by determining the risk of developing certain diseases as well as the course those diseases will take. For example, women have a higher risk of developing autoimmune diseases, such as multiple sclerosis and rheumatoid arthritis, while men are more likely to have more significant morbidity when infected with COVID-19 and other infectious diseases. There are also differences in cardiac morbidity and various psychiatric disorders and between the efficacy and side effects of drugs for men and women.

Increasingly, medical researchers, pharmaceutical companies, and health authorities have been dealing with gender variance and the need to adjust treatments and drug dosages to a patient’s gender. However, research in the field of gender medicine has been challenging because there are no genetically identical twins one of whom is male and the other of whom is female. Large numbers of women and men have needed to be tested to overcome the natural genetic variance between humans, which masks the differences between the sexes. In addition, when differences have been found, it has been impossible to know whether they are due to sex chromosomes or to the different hormonal compositions of women and men. The new model overcomes these challenges.

To develop the unique stem cells, Dr. Reubinoff and his team used the blood cells of a man with Klinefelter syndrome as a result of which he has an extra X chromosome (XXY). The genetic condition occurs in 1 to 2 of every 1,000 men.

Said physician-researcher Ithai Waldhorn, MD, as part of whose doctoral dissertation the study was conducted, “The blood cell donor in our study was unique and one of the few Klinefelter sufferers in the world whose blood also had small subpopulations of normal male (XY) and female (XX) cells.”

The donor’s blood cells were transformed into induced pluripotent stem cells and isolated stem cells that were genetically identical except that they were male or female. Pluripotent stem cells are able to develop into different types of cells needed for therapeutic purposes; isolated stem cells can mature into any cell type and are therefore ideal for developing cellular models for studies of sex-related differences in all human cell types. In addition, the stem cells enable the study of the differences between males and females, in the absence as well as the presence of sex hormones, and distinguish between genetic and hormonal influences on gender differences.

Also participating in the study were Tikva Turetsky, Dr. Debora Steiner, Dr. Yaniv Gil, and Dr. Michal Gropp, all from the Hadassah Medical Organization’s Sidney and Judy Swartz Stem Cell Research Center at The Goldyne Savad Institute of Gene Therapy, and Dr. Hadar Benyamini from the Bioinformatics Unit of the Hebrew University.

To read an article that appeared in the Israeli press, click here.