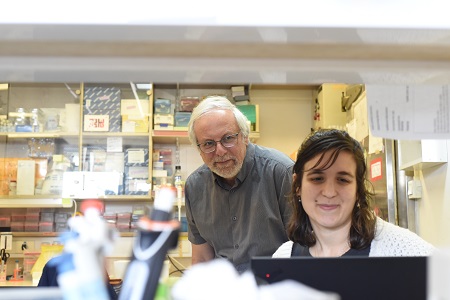 Using a ground-breaking algorithm, which they developed in collaboration with a Switzerland colleague, Hadassah Medical Center researchers found that every third individual is a carrier of a recessive inherited eye disease. The results of their study were published in the February 4, 2020 Proceedings of the National Academy of Sciences of the United States of America.

The new algorithm, or “pipeline,” calculates the numbers of carriers of inherited retinal diseases (IRDs) and how many of those carriers will have impaired vision.

“In the past, genetic mutations were thought to be rare,” says Hadassah molecular ophthalmologist Prof. Dror Sharon. “Today we know that every human being carries recessive mutations for one disease or another. The debate is over how many mutations each person has. While I can’t be exact, it seems each one of us carries between 10 and 100 mutations in our genome.”

IRDs are the leading cause of sight loss in people aged 16 to 64. The most common IRDs are retinitis pigmentosa (RP), Stargardt disease, Usher syndrome, and achromatopsia. Most IRD sufferers become blind in their 50s or 60s.

In 2018, Sharon and researcher Mor Hanany, together with colleagues from the Israeli Inherited Retinal Disease Consortium (IIRDC), performed similar research in Israel and published their results in the European Journal of Human Genetics. After examining genetic data from some 2,000 families, they found that one in four Israelis is likely to be a carrier of a genetic mutation. The figure rises to one in every two individuals among Jerusalem’s Arabs.

Encouraged by the success of that research, Hanany and Sharon, in collaboration with Prof. Carlo Rivolta from Switzerland, looked at a much broader population. In their recently published article, they examined genetic sequences from 183,000 people in six population groups around the world, two in both Asia and Europe and one each in Africa and Latin America.

Their results show that at least 36 percent of the world’s population, or 2.7 billion people, are carriers of IRD mutations, of which 5.5 million are expected to have IRDs. The researchers created a database containing over 250,000 sequence variants in 187 known IRD genes. Of these variants, 10,000 were determined to be disease-causing mutations.

A sequence variant is defined as any sequence change as compared to the reference genomic sequence determined by the human genome project. A mutation is defined as a variant that can cause disease.
The new algorithm and its findings are significant for such large bodies as the World Health Organization and pharmaceutical companies, as well as hospitals and individuals.

International health organizations can plan initiatives based on regional and national statistics. Preventive measures can be taken to try to eradicate hereditary diseases. For example, pre-implantation genetic testing can be performed on embryos resulting from in-vitro fertilization to identify genetic defects.

“For me, the biggest contribution will be in genetic counseling,” says Hanany. “Couples will ask their counselor, ‘What are the chances that our children will have disease X?’ Now they will be able to calculate the probability far more accurately.”

In addition, other researchers can edit the Hadassah algorithm and apply it to various inherited diseases throughout the body.