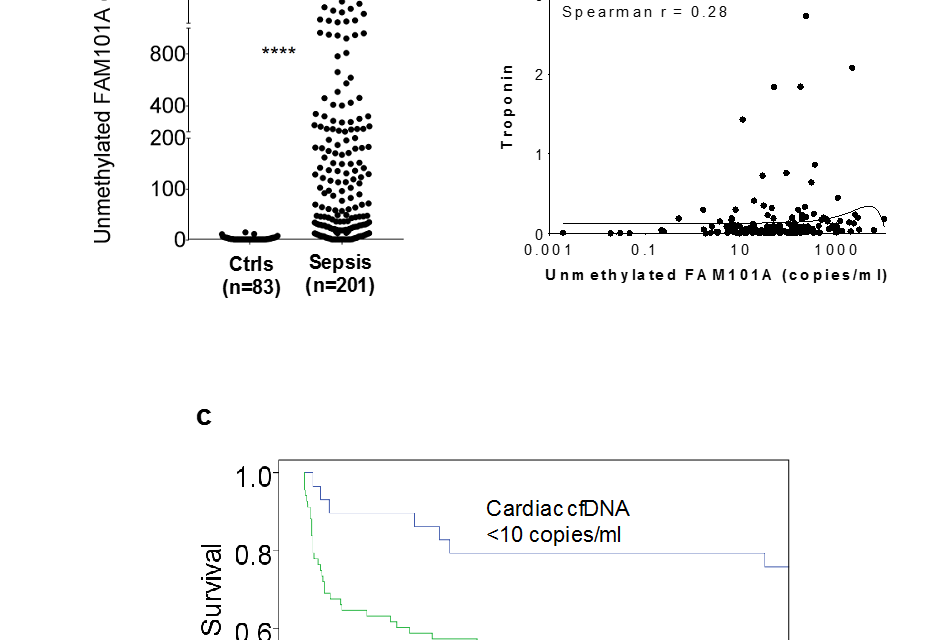 Figure: Cardiac cfDNA levels in patients with Sepsis – Hadassah Medical Center researchers, in collaboration with colleagues at the Hadassah-Hebrew University School of Medicine, have developed a blood test which definitively detects death of cardiac muscle cells following an acute heart attack and in the case of sepsis.

The plasma of healthy individuals contains essentially no cfDNA, whereas patients who have experienced an acute heart attack show a robust cardiac cfDNA signal that correlates with levels of troponin. Most interestingly, it was found that the presence of cardiac DNA in the plasma of patients with sepsis predicts a four times higher chance of these patients dying within 90 days of hospitalization. These findings, the authors say, indicate that myocardial cell death is an important determinant of mortality following sepsis, and that elevated cardiac cfDNA is a strong prognostic biomarker in sepsis. By the same token, the authors note, “the strong correlation between cardiac cfDNA and mortality underscores the importance of cardiac health in facilitating survival from sepsis. These findings may have implications for the management of septic patients.”

Although troponin, a protein biomarker, is the gold standard for diagnosing cardiac muscle damage, it does have limitations. As the researchers explain, it is difficult to determine if release of troponin into the bloodstream necessarily reflects death of cardiac muscle or just reversible cardiac muscle injury. In addition, renal dysfunction, a common condition in patients with heart disease, slows down clearance of troponin and complicates the interpretation of elevated troponin. In contrast, cardiac cfDNA directly reflects cardiac damage and is not altered by kidney dysfunction.

The researchers acknowledge that additional experiments are needed to test the idea that cardiac cfDNA is an exclusive marker of cardiomyocyte death, and to validate the clinical utility of this new biomarker.

The study results were published in the April 24, 2018 online issue of Nature Communications in an article entitled “Non-invasive Detection of Human Cardiomyocyte Death Using Methylation Patterns of Circulating DNA.” The study was a collaboration among researchers from the Hadassah Medical Center’s Department of Cardiology, Department of Cardiothoracic Surgery, Endocrinology and Metabolism Service, Department of Anesthesiology and Critical Care Medicine, and the Department of Developmental Biology and Cancer Research at The Institute for Medical Research Israel-Canada of the Hadassah-Hebrew University School of Medicine.