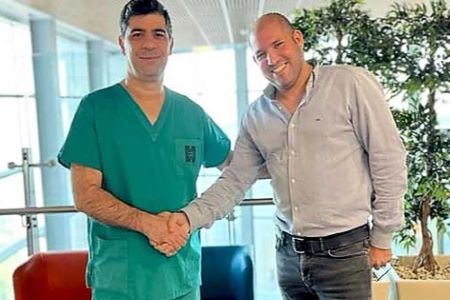 As far as he knew, Meidan Schwartzman was a strong, healthy 33-year-old man with no medical issues. He had recently completed intensive military service and felt fine.

When he decided to enroll in a gym, he was required to perform a battery of extensive routine tests, including an electrocardiogram, which monitors the heart’s electrical activity. His proved to be extremely irregular.

The nurse attending him immediately brought in a physician, and Meidan was rushed by ambulance to a hospital. “From that moment on, my life turned upside-down,” he relates.

His journey from doctor to doctor and hospital to hospital began. Doctors gave him various medications, but they failed to stabilize his heart long-term. He suffered from shortness of breath, rapid pulse, and dizziness. He got to the point where he could no longer work or live a normal life. He lived with the fear that something terrible could happen to him at any minute.

One doctor implanted a pacemaker, but it did not solve his problem. Another doctor told him he had no choice but to undergo an atrioventricular node ablation, a procedure that uses heat (radiofrequency) energy to destroy tissue between the upper and lower chambers of the heart. The ablation burns the heart’s natural transmission system, leaving the heart completely dependent on a pacemaker for life.

It was then, Meidan says, that a miracle occurred. “Just before the procedure that would have completely changed my life, I read a Facebook post, written by Dr. Itzik Biton, senior cardiologist at the Hadassah Medical Organization’s heart institute, in which he talked about cardiac arrhythmias and the ways in which he treats them. I thought to myself that I had nothing to lose, and I wrote him a message describing my situation.”

Dr. Biton got back to him promptly and, after asking Meidan a few precise questions, he advised him to come to Hadassah in two days. “There I met the man who saved my life,” Meidan says. “An amazing, humble man who just wanted to help.”

With an algorithm created through artificial intelligence, that was being tested at Hadassah, Dr. Biton and his team were able to pinpoint the source of Meidan’s arrhythmia. They found that it came from the sinus area of the heart and not from the left atrium, as had been thought by the doctors in all the other hospitals. They then fixed his heart by performing a targeted ablation, which allowed them to preserve the heart’s natural transmission system. Meidan no longer needed a pacemaker or medication. His arrhythmias were completely gone.

Dr. Biton notes, “Some people live with arrhythmias for many years in the belief that they are fated to do so, but I am happy to tell them that this is simply not the case. We can help them.”