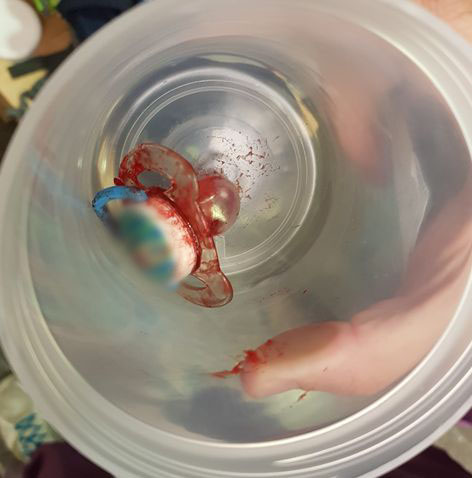 The nanny noticed it. The pacifier was gone. Baby Hillel, age one and a half, had swallowed the pacifier whole, and it was stuck deep in his throat.

There was no way the nanny could pull the pacifier out. She ran with Hillel to the nearest neighborhood health clinic. And then, together with the clinic doctor, they were in an ambulance on the way to the Hadassah Medical Center’s Judy and Sidney Swartz Center for Emergency Medicine.

Hadassah Pediatrician Itai Gross was on duty. Hillel was having trouble breathing. “I called in our multidisciplinary team, but, at first, we couldn’t get the pacifier out either. We put Hillel on a ventilator, anesthetized him, and sent him to the operating room where surgeons were waiting.”

“The pacifier was standard with a silicon tip and a hard plastic handle and base,” said Dr. Menachem Gross. “The pacifier was stuck in the baby’s esophagus, and there was a risk of its blocking his entire airway. In the operating room, we were able to maneuver the baby’s throat and extract the pacifier from the pharynx without cutting. Ironically, in the past, there was a fear that pacifiers made of a soft plastic could be swallowed by young children, but today pacifiers are made with a wide base to prevent cases like this. It is unclear how this happened.”

Dr. Saar Hashavia, Director of Pediatric Emergency Medicine at Hadassah Hospital Ein Kerem, said, “This case emphasizes the importance of maintaining contact between local physicians and paramedics and the physicians in the emergency room. The first call to Hadassah came from the local clinic doctor. The doctor continued to update our staff in the emergency room throughout their ride to the hospital. When Hillel arrived at Hadassah, we were ready for him. A multidisciplinary staff of ear nose and throat specialists, pediatric intensive care physicians, and anesthesiologists were waiting with the emergency room doctors. This definitely contributed to the effective treatment we provided baby Hillel.”

Following several days in Hadassah’s Pediatric Intensive Care Unit, Hillel woke up and was then transferred to the Pediatric Surgery Department. His parents were by his side throughout.

“I want to thank all those whose actions led to my child still being here with me today,” said his dad, Hagai Nissani. “First of all to Hillel’s nanny, who was in a difficult situation but managed to do the right thing quickly, then to the local health clinic and paramedics who quickly brought Hillel to Hadassah, and finally to Hadassah Hospital–especially Dr. Gross and the PICU staff, who worked with great dedication and did all they could for Hillel–and the Pediatric Surgery Department staff. Everyone did their utmost to help Hillel get better. Thank you, all.”