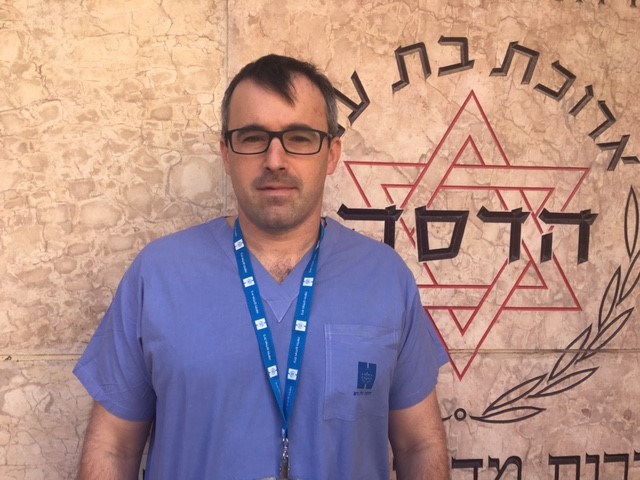 Senior Hadassah Medical Organization Surgeon Dr. Josh Schroeder was eating his pre-Yom Kippur meal with his wife, Yaira, and three children when he received a phone call from a representative of the Greenfield family asking if he could go to Georgia (the former Soviet Union) to prepare Noa, a severely injured Israeli mother, for safe airlifting to Israel for life-saving treatment.

The Greenfield family’s car had tumbled off a Caucasus Mountain road in Northeast Georgia into a ravine. Two of the four children, Nevo, age 5, and Achinoam, age 10, were killed. Noa had sustained serious back and neck injuries.

Before Noa could be evacuated to Israel, an orthopedic specialist would have to treat her neck and back injuries. Dr. Schroeder agreed in principle to go, consulted with his Orthopedics Department Director, Prof. Meir (Iri) Liebergall, and his Spine Unit Director, Prof. Leon Kaplan. Originally from Russia, Prof. Kaplan was able to fill Dr. Schroeder in regarding what he might expect in a former Soviet Republic.

Air transport was arranged. Dr. Schroeder went first to Hadassah Hospital Ein Kerem to retrieve the equipment he would need and then boarded the aircraft for the two-and-a-half-hour flight to Tbilisi. When he landed, the doctor/pilot and he went to see the injured Greenfield children in a children’s hospital and then the parents in a second hospital. The urgency of bringing the mother back immediately to Israel was clear because she required the expertise of Hadassah’s orthopedic team.

“When I got back to Israel,” relates Dr. Schroeder, a very impressive group of specialists was waiting at the hospital. With it being the holiday of Yom Kippur, some of the physicians had come by foot or by bike to take care of the Greenfield family.” Dr. Schroeder and Prof. Kaplan operated for the remainder of the day. The mother is now in stable, but serious condition. The father, Hanoch, and one of his children were slightly injured and were able to go home. The second child was moderately injured and is now being cared for in the Charlotte R. Bloomberg Mother and Child Center.

Achinoam, the 10-year-old who was killed, had been named for her uncle, Yehuda Greenfield, who had been killed in the Second Lebanon War.