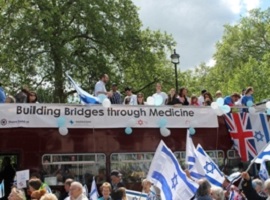 Hadassah’s message of “Building Bridges through Medicine” and “Jew, Christian, and Moslem–we’re all the same inside” resonated so well with other medical charities that Hadassah UK was joined on our medical bus by Shaare Zedek, Laniado, and Magen David Adom Emergency Services.

About 50 organisations joined in the parade, creating a multitude of colourful floats, marching, playing their bands, dancing, riding their motorbikes–all to celebrate Israel’s belated birthday in a colourful parade from Piccadilly to the rally in Trafalgar Square afterwards. The Chief Rabbi Lord Sacks, when eloquently addressing the rally, particularly mentioned and paid tribute to Israel’s hospitals and universities, taking our bus multi-religious, multi-ethnic message to the “Closer to Israel” rally.