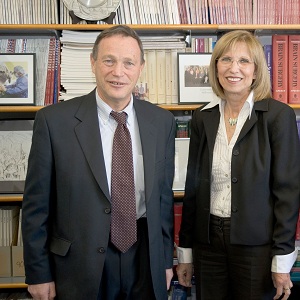 Initiated by Hadassah Australia, the collaboration between Prof. Tali Siegal, Director of the Hadassah Medical Center’s Gaffin Neuro-oncology Center, and Prof. Andrew Kaye, head of Neurosurgery at the Royal Melbourne Hospital in Australia, has turned out to be a winning alliance for brain cancer monitoring and targeted treatment.

With some forms of cancer, doctors can monitor the progress of treatment more easily and switch to different drugs to stay ahead of the disease; brain cancer, however, provides a particular challenge. It is difficult to monitor what is going on inside the skull and to determine precisely what an MRI scan is indicating. For example, once a patient is operated on to remove a malignant brain tumor and then receives radiation treatment and chemotherapy, a follow-up MRI may show swelling. The challenge is knowing whether this is due to a regrowth of the tumor or merely inflammation. For years, Prof. Kaye had been frustrated over this dilemma. What he needed was concrete evidence in the person’s blood as to whether the cancer had returned.

In April 2009, Prof. Kaye joined a Hadassah Australia mission that brought Australian researchers together with their colleagues at Hadassah in Jerusalem. It was then that he met Prof. Siegal, who described how brain cancer cells shed DNA into the blood. She explained that in her laboratory, researchers were trying to use that DNA as a marker for brain cancer. Prof. Kaye had been thinking about where to go for his next sabbatical; it was clear that he wanted to be at Hadassah.

Since his first three-month stint in 2010, Prof. Kaye has been coming to Jerusalem for six weeks every year; in between, he keeps in touch with Prof. Siegal through Skype. “I need to see the whites of their eyes; the cross-fertilization is terrific,” notes Prof. Kaye.

“Israelis are famous for making the desert bloom,” he says, “but here, they take impossible ideas and make them bloom.” Dr. Siegal comments: “We’ve established teams that work well together; I can tell you it’s wonderful.”

Besides exchanging ideas, the two colleagues are combining samples from patients at their respective hospitals to find out whether blood-born DNA can track the progress of brain cancer in a clinical setting. Over the last two years, they have recruited 200 patients with newly diagnosed brain cancer. They have also collected hundreds of brain tissue and blood samples at various stages of the patients’ treatment.

At Hadassah, Dr. Siegal’s team is refining the technique, measuring the quantity of blood-born tumor DNA to see if it corresponds with the growth of the tumor. They are also testing the quality of the DNA by checking for mutations on 10 different genes. The idea is for the DNA of the tumor cells to provide precise details about the individual patient’s brain cancer. As in any warfare, eliminating an enemy is only as good as the ability to target it. With a range of drugs and treatments on the oncologist’s shelf, the goal is to target the right treatment to the specific cancer.

Prof. Kaye imagines that, thanks to the Hadassah/Royal collaboration, this will be possible three to four years down the line. If he knows the specific tumor’s DNA, he has hope that his surgical strike, backed by precisely targeted chemical warfare, will eventually win him the battle against cancer.

(For more information about the medical research and the beginning of this joint initiative, see the September 2009 issue of the Hadassah International ebulletin and the 2009 article by Elizabeth Finkel. http://hadassahinternational.org/news/article.asp?id=1572.)