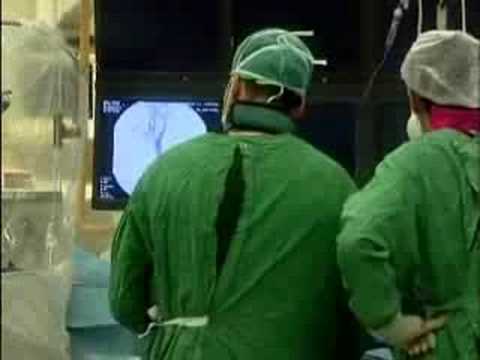 Sharona was looking forward to the Chanukah holiday with the enthusiasm of an eight-year-old child. The only cloud overshadowing the family’s plans was the swelling around her left eye that refused to subside. “It’s probably some kind of infection,” said their family doctor, writing out a prescription for antibiotics. When the family lit the first Chanukah candle, however, the puffiness was visibly worse and Sharona could no longer ignore the growing pressure on her eye socket. An MRI scan at a nearby Haifa hospital produced a diagnosis: a rare genetic malformation in the arteries of her brain. This irregularity was causing the child’s eye to grow out of its orbit and would eventually lead to a massive, fatal intra-arterial bleed.
Sharona’s doctors and family in Haifa launched a global web search for someone who could help. The name that surfaced was that of Hadassah’s Dr. Jose Cohen, who is one of the world’s foremost experts in the new specialty of endovascular neurosurgery. “We immediately ruled out brain surgery because of the patient’s young age, and the complexity of her vascular malformation,” says Dr. Cohen. “We explored three tried-and-true non-surgical approaches, but none succeeded.”

With no traditional options left, Dr. Cohen decided to try something never previously performed for this condition. “I tried to heal the lesions in the damaged arteries with a sophisticated material known as an endovascular coil,” Dr. Cohen explained. “It’s something we use in stroke patients; we insert it into the femoral artery in the leg and guide it angiographically through the vessels into the brain. Once it reaches the right place, we use it to seal the damaged artery.”

For Sharona, the procedure had to be adapted. “We needed to treat her affected eye as well as the defect in the vessels in her brain,” says Dr. Cohen. “And to do so, we needed to create a vascular bridge from her eye into her brain.” It fell to Hadassah’s ophthalmic surgeons to build that bridge.

On the third day of Chanukah, Sharona was taken into surgery. Five hours later, with the vital vein in her eye now dilated and accessible, she was rushed up to the endovascular neurosurgery’s angiography suite, where Dr. Cohen and his team took over. Meticulously, they inserted a micro¬catheter, less than a millimeter in diameter, into the exposed eye vessel and eased it up into Sharona’s brain. With the tiny vessels visualized on a rotational three-dimensional digital angiographer, the physicians inserted an endovascular coil through the catheter to repair her malformed brain arteries. “That first coil didn’t do the job, nor did the second or the third, but we persisted,” says Dr. Cohen. “In most hospitals you need permission to keep using such an expensive material, but there’s no such rule in Hadassah. We just kept inserting the coils to save our patient’s life.” It eventually took 16 coils and 8 hours! But less than a week after her 13-hour surgery, Sharona was back in school!