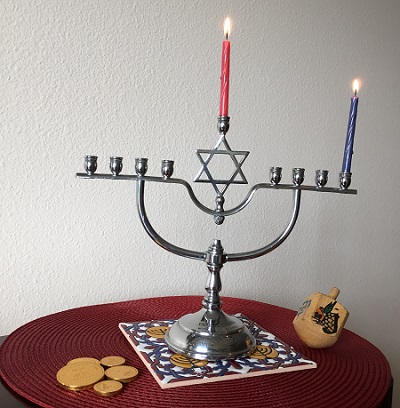 A Pregnancy in Trouble: Hanukkah Miracle #1.

Call her Hannah Leah. In her 39th week of pregnancy, shortly before it was time to light the first Hanukkah candle, she appeared in the birthing center at Hadassah Hospital Ein Kerem. “I’m not in labor, but I had this instinct that I needed to come to Hadassah,” she said. The staff took her seriously.

“We see only a few life-and-death situations where we have only seconds to deliver a live child,” says midwife Zarbiv. “One of them is cord prolapse, when the breaking waters are so fast and powerful that they push the cord into a position that can strangle the baby. That’s what I was seeing.” Midwife Zarbiv immediately pressed the Red Button and summoned obstetrician David Knigin to help her deliver the already crowning baby by vacuum. In under a minute, a baby boy was delivered safe and sound, weighing 4.55 kilo (ten pounds)!

He is the largest baby midwife Zarbiv has ever delivered. “Had Hannah Leah not shown up when she did, had her water broken even on the way up to Hadassah, had we not responded immediately, had we not known what to do, the outcome would have been different. We are calling him our Hanukkah Miracle Baby.”

How apt that this baby boy is Hannah Leah’s eighth child, or one might say, the eighth light on her Hanukkah menorah. Think of how different it would have been for Hannah Leah without Hadassah to the rescue.