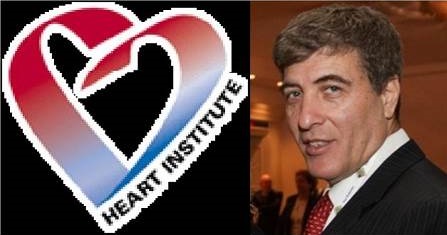 Celebrating his 13th (“Bar Mitzvah”) year as the Chair of the Heart Institute, Prof. Chaim Lotan is actually also celebrating 40 years with Hadassah.  Prof. Lotan began his affiliation as a student at the Hadassah-Hebrew University School of Medicine. The child of Holocaust survivors from Chernovitz, Romania, Prof. Lotan recalls that he always admired doctors as a child—their “dignity, their importance, and their honor.” When the Germans occupied their homeland, his family was moved into a ghetto. His mother was one of the few who survived typhus and the hard labor. In the 1950s, his family immigrated to Israel, where Prof. Lotan served as a paratrooper in the Israel Defense Forces’ prestigious Golani Brigade.

Cardiac medicine attracted him early on in his medical career. As he explains, the beginning of the 1980s brought a revolution in cardiology–with the introduction of minimally invasive procedures like angioplasty and other catheterizations. He realized that the cutting-edge of medicine overall and particularly cardiology was at Hadassah.  And, he says, it has remained that way. That’s why Prof. Lotan has never left, noting that if he really wanted to be on the cutting edge, “Hadassah was his place!”

Prof. Lotan decided to become an interventional cardiologist.  His renowned career at Hadassah included serving as head of the Catheterization Laboratory before becoming head of the Institute. His is a true Hadassah family, with his wife, Dorit, a nurse in charge of Internal Medicine A; his son, a psychiatrist at Hadassah; and his son’s wife, also a doctor at Hadassah, specializing in genetics. When asked recently what his dream was, he replied: “My dream is that we will be able to keep the hospital at the same level that I found it as a student.  For me, there was the world of medicine, there were hospitals, and at the top of the hill was Hadassah.”

In the l980s, Hadassah, finding that a blood clot (a thrombus) was obstructing the coronary artery, began dissolving the thrombus with streptokinase. “Hadassah was the first in the world to introduce this clot-busting procedure,” Prof. Lotan relates. “The first papers in the medical literature at that time,” he says, “were from Hadassah.”

Hadassah then introduced the idea to begin the procedure in the ambulance.

Realizing that to save a heart patient’s life it is crucial to get the patient to the Catheterization Lab as soon as possible, Hadassah introduced the protocol of having the patient brought straight from the ambulance to the catheterization lab, rather than to the emergency room first. In this way, it can be less than an hour from the first moment a patient experiences heart pain to the time an interventional cardiologist opens his artery.

As a result, mortality rates drop significantly and damage to the heart muscle is minimized. It used to be that mortality rates from heart attacks were 15 to 20 percent, Prof. Lotan reports. Then came the new medications, he says, and mortality dropped to 10 percent. “We thought that was excellent,” he added.  Today, with catheterization, mortality rates at Hadassah have dropped to 2.5%!

When Prof. Lotan’s father had a heart attack at age 76 and his local hospital was afraid to treat him because of his age, Prof. Lotan had him brought to Hadassah, where he was given a quadruple bypass that saved his life. Years later, his father experienced weakness in his legs and hand and Hadassah’s physicians found that the weakness was  caused by narrowing of an artery to the brain.  They performed another successful operation and he lived to the age of 94.  “I owe his life to Hadassah,” Prof. Lotan comments. Hadassah’s Heart Institute cares for patients throughout the life span–from fetus to senior citizen. Its specialists provide solutions to heart problems from congenital malformations, to heart disease, valve degeneration, and heart failure. Prof. Lotan relates that Hadassah performed a catheterization and operation on a man who was over 100 years old. The patient population and staff are diverse, mirroring the diversity in Jerusalem. Just recently an Arab nurse treated a Chief Rabbi of Israel in Hadassah’s Intensive Care Unit, Prof. Lotan says.

Research at the Heart Institute

As people begin to live longer, new challenges face cardiologists–for example, diseases of the aortic valve, the valve between the left ventricle of the heart and the aorta, which is the largest artery in the body and carries the entire output of blood. Aortic problems typically surface in the eighth or ninth decade of life.  Aortic stenosis, where the opening to the aortic valve narrows and restricts blood flow, is a common problem. Hadassah is conducting a large research study on aortic stenosis. Its physicians have developed a unique animal model that simulates aortic stenosis and are now researching various treatments. One treatment done at Hadassah and in only a few other centers in the world is the Transcatheter Aortic Valve Implantation (TAVI) procedure, whereby the valve is replaced through a catheter–without opening the chest.  To date, over 200 TAVI interventions have been done. “That’s a revolution,” says Prof. Lotan.

Another innovation is Hadassah’s Heart Failure and Heart Muscle Disease Center, which reaches out into the community to bridge the gap between hospital-based and community-based medicine. Through this Center, Hadassah physicians with expertise in managing heart failure travel to various local clinics to consult with family physicians on the more difficult patients. At the same time, Hadassah’s Heart Institute has opened several other clinics in the community in order to efficiently and effectively treat patients with heart disease. These clinics have significantly decreased visits to the emergency room as well as hospital stays and proven much less expensive.  Hadassah is now a role model for the country in treating heart disease in this fashion.

Thanks to a major grant from Psychotherapist Irene Pollin, Founder and Chair of Sister to Sister, a 13-year-old organization devoted to preventing heart disease in women, Hadassah recently created the Linda Joy Pollin Cardiovascular Wellness Institute–a major vehicle for reaching and influencing the community about heart disease risk factors.  Prof. Lotem recalls that he served on a committee of the Ministry of Health investigating the death of a young woman who died of a massive heart attack. She had been seen by three doctors that day–a primary physician, the doctor in the ambulance, and a hospital physician. All of them dismissed her severe chest pain. They told her to take pain killers. That night, she died.

Prof. Lotan brings out that the public perception, promoted by the medical community, is that women are protected from heart disease.  But, he notes, this is not the case.  He feels it is his mission and responsibility to change that perception and raise awareness among women and physicians that women need to take steps to reduce their risk factors for heart disease–the number one killer of women. His message is: “Don’t leave risk factors untreated; Don’t leave the heart unexamined.” At the same time, women need to stop ignoring chest pain, Prof. Lotan notes. Data reveal that women reach the hospital one hour later than men following the onset of chest pain.

Through its new Pollin Wellness Institute, Hadassah has begun a major community outreach–particularly to the ultra-religious and Arab communities, whose populations are at higher than average risk for heart disease. These groups have a high rate of diabetes, hypertension, and obesity; smoking is prevalent among the husbands, which exposes their spouses to second-hand smoke. When you look at the Arab women’s coronary arteries through catheterization, you see that the heart disease is much more advanced, much more diffuse for their age than among Jewish women. Hadassah is proposing to approach the community and try to get Arab women to modify their risk factors–to check their blood pressure and change food habits, for example. In discussing the problem with colleagues from Arab countries, Prof. Lotan has found that they face the same high heart disease burden among the women. At the same time, Prof. Lotem stresses the need to reach the teenagers–especially the girls–because they are going to be the mothers of the future and influence the next generation.

“The model we are building here is transferable to other countries,” Prof. Lotan brings out.  “And there is no one better to help us share our message and model than Hadassah, the Women’s Zionist Organization of America and Hadassah International.” “The research and clinical work that is being done here,” relates Prof. Lotan, “has impacted the lives of thousands of people in Israel and worldwide.”

He notes how gratifying it is to run into someone who says to him, “You saved my life 20 years ago.” What keeps him going, he says, is saving a life. “There’s nothing more sacred.”