The Human Spirit: the Boy Who Fell Five Floors Down an Elevator Shaft 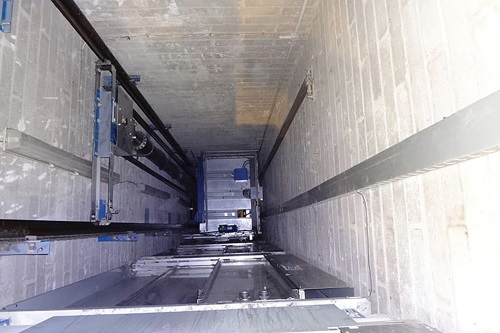 This article written by Barbara Sofer appeared in The Jerusalem Post.

“When I first saw Joseph, I wasn’t sure we could do anything.”

I’m sitting by the bedside of a 10-year-old boy named Joseph. He’s a slim, handsome child with deep green eyes, from which a scar now runs down to his chin. Joseph is focusing on the tablet on his lap, playing music on it, tapping out tunes with a music therapist.

One month ago, Joseph was home in the evening with his parents, an older brother, and a teenaged sister. Three of his siblings are married and no longer live at home. The family had finished dinner. It was already dark and a cold, rainy night. The apartment where they’ve lived for five years is on the ninth floor. Joseph asked if he could go to play with a school friend on the fifth floor. He took the elevator down, rang the bell, but his friend wasn’t home. Disappointed, Joseph pressed the elevator button to go back up to his apartment. When the door opened, he stepped forward.
The elevator wasn’t there.
Joseph plunged down the shaft, slamming into the cement floor five floors below.
Half an hour after Joseph fell, a neighbor returning home heard grunts like a wounded animal from the elevator shaft.

His parents weren’t worried that he wasn’t home – he often played with his friend in the building, and it wasn’t late. Then breathless neighbors came knocking.
They advised Joseph’s mother not to look. “They told me his brains were seeping out,” she says.

Other “good Samaritan” neighbors brought the bleeding boy to the nearest Kupat Holim health clinic. The staff immediately summoned an ambulance. Joseph’s brother rode with him as the ambulance raced across town to Hadassah Medical Center in Jerusalem’s Ein Kerem. Still another neighbor drove behind with Joseph’s distraught parents.

The medics ran inside to the trauma center with the broken boy.
“AIRWAYS FIRST,” says Dr. Miklosh Bala, head of the Trauma Unit, repeating the mantra of urgent care. “We needed to put him to sleep, but he basically had no mouth for anesthesia.”

The team performed a cricothyrotomy, an incision through the skin, and cricothyroid membrane in the neck to establish an airway. A CT scan charted the damage.
Next up were the neurosurgeons to stanch the fluid leakage from the brain.
Even for Dr. Samuel Moscovici, a senior neurosurgeon, the sight of Joseph’s injuries was horrifying.

He had frontal brain injury and cracks in his anterior skull base. Fortunately, Moscovici, born in Venezuela, had spent two years as a fellow specializing in skull base microsurgery. “I had to stop the brain hemorrhage and block the leakage to prevent permanent damage or death, and close the dura, the thick membrane that covers the brain and spinal cord.” More good fortune. French Jews in Hadassah France had recently donated a sophisticated Kinevo 900 microscope, which made the suturing faster and more accurate.

Maxillofacial surgeon Dr. Adir Cohen, called in from his home, was next.
“When I first saw Joseph, I wasn’t sure we could do anything,” says Cohen. “His head was split open like a watermelon. I had to study the three-dimensional CT, to understand where the damage came from, and wait for Dr. Moscovici to tell me the brain was protected. I needed everything I had ever learned and all my experience to figure out what to do. Even though his head was split from eye socket to chin, I made a lateral cut between the ears to see exactly where the fractures were. If we succeeded in repairing the skull, I didn’t want to leave an ugly scar. Slowly, I began pulling the face together, gently tugging the muscles, making sure no further damage was done. Just about everything was broken.
“Our team operated all night. Our priorities were to save Joseph’s life, preserve his brain, and put his face back in order. I could come back later to fix the smashed lower jaw and the teeth.”

Toward daybreak, as the neurosurgical and maxillofacial teams began wrapping up, orthopedic surgeon Naum Simanovsky cleaned and fitted temporary repairs for the femur and humeral fractures. Joseph’s thigh bone femur – his thigh bone – was sticking through the skin, and the long bone in his arm was broken.
Later, when Joseph was stronger, Dr. Michael Zaidman operated twice on the fractures.
“We needed the whole pediatric orthopedic team, also doctors Vladimir Goldman and Tareq Shrabaty, to put Joseph back together again,” says team leader Zaidman.

Joseph’s Dad collapsed in tears when first seeing his shattered youngest son. But the hospital social worker convinced him to overcome, that his presence could be reassuring.

His mom stayed stoically by his side, holding his hand. Hurtful messages on WhatsApp said there were rumors that Joseph was really dead. How could anyone sustain such a fall? She shows me photos of Joseph before the accident, always with a dazzling smile. He’s a good student, athletic and popular, she says. Even now he looks handsome, I tell her. The plastic surgeons will erase his scar.

There’s much more to do: jaw repair and all those teeth, trauma therapy and physical therapy.

Still, a month after the fall, here is Joseph playing music and writing on a tablet, trying new games on a cellphone. He’s not talking because his mouth is wired.

“I’m optimistic that the fractures will heal,” says the pediatric orthopedist. “His brain seems fine,” says the neurosurgeon. “We think he’ll be perfect,” says the maxillofacial surgeon. “It’s the worst case I’ve ever seen where the results are so remarkable.”
And yes, when his face heals, Joseph will be able to smile again.

I’m thinking how fortunate we are to live in a country where Joseph could receive all this care without the added burden of medical costs. Joseph’s mother is a housewife, his father a currently unemployed sanitation worker. Joseph’s family lives in Kafr Akab, the northernmost neighborhood of Jerusalem, bordering on Ramallah and a place of chronic unrest.
His mom teaches me the Arabic word for miracle: “muejaza.” In the hospital, she’s learned the Hebrew one, “ness.” She’s grateful to God but agrees that miracles don’t happen in a vacuum.

She’s so thankful to the devoted and professional care that has brought back her son. With her permission, I’ve written his story, interviewing Joseph’s doctors, although I couldn’t bring myself to look at the before and after photos they offered to show me.
People often ask me why stories like this don’t “get out to the world.” Now, that’s your job, dear readers.