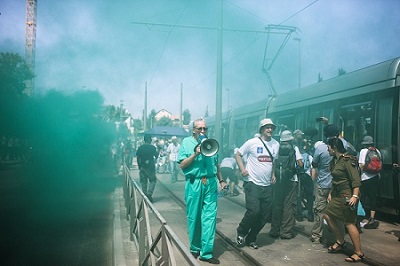 For the past 20 years, every student in Hadassah’s medical school has participated in a two-week trauma course after finishing his sixth year; as a result, there are almost 3,000 Hadassah graduates practicing medicine around the world who have been trained to treat blast trauma victims and handle triage during a mass casualty event.

In addition, many others have received training at Hadassah or from Hadassah physicians who traveled to medical centers abroad and shared their expertise. Following the bombing during the Boston (MA) marathon, for example, Hadassah’s protocol was used to treat the victims since some of the medical personnel had learned the system from their colleagues at Hadassah.

Hadassah’s trauma course–which culminates in a mass casualty drill in Jerusalem, involving the police, Home Front Command, Air Force, and Emergency Medical Service– is the “only one of its kind in the world,” relates Prof. Avi Rivkind, head of the Hadassah Medical Center’s Trauma Unit and Emergency Medicine.

“Unfortunately,” says Prof. Rivkind, “my ‘specialty’ is in terror activities, mass casualty, and blast trauma.” Prof. Rivkind, after receiving his medical education in Jerusalem, participated in fellowships in Maryland and California before returning to Hadassah to open the first Trauma Unit in Israel. Israel’s deep experience with mass casualty events, however, provided him with the experience to publish a “new bible” on these medical specialties, which is now helping to save patients all over the world.

The severity of people’s injuries and the condition of these patients when they arrived in the emergency room pushed Hadassah’s surgeons to invent new techniques and procedures. “With sweat, tears, and blood, we learned,” Prof. Rivkind notes. As he explains: “We are fighting with the devil, so we have to create some ‘tricks’ that maybe even the devil doesn’t know.” For example, they developed various gadgets and methods to stop bleeding and improve respiration. They used NovoSeven, a drug approved for hemophiliacs, to save the life of a 15-year-old trauma victim, who was bleeding profusely.

“The Hadassah spirit,” relates Prof. Rivkind, “comes from a combination of commitment, Judaism, Jewish tradition, devotion, a role model of previous generations of doctors, and our families. The Hadassah spirit is a DNA.”

The son of Holocaust survivors and the progeny of a grand rabbi, Prof. Rivkind says he carries on his shoulders a heavy weight of Jewish history and values which dictates “that there should never ever be any discrimination.” It is “torah, gemilut chasadim (deeds of loving kindness) and the spirit of Hadassah which together help me personally to treat patients.”

A strong belief that “deep in their hearts, even in the worst situation, all patients want to stay alive,” leads Prof. Rivkind to persevere in saving a life beyond when many other physicians would give up. As he expresses, “I believe we should do everything, everything to save a person’s life.”

Taking an objective look at Hadassah’s success in saving victims of trauma, Prof. Rivkind and his colleagues conducted a study of their trauma patients from the last 10 years, comparing Hadassah’s survival rate to those of 51 Level One trauma centers in the United States. The results reveal that for severely injured patients, the mortality rate is about 11.5 percent at Hadassah; in the US, it is 19.5 percent. Overall mortality of trauma victims at Hadassah was 2.1 percent; in the US, it was 6.7-7.6 percent. “The difference between us and the American trauma system,” Prof. Rivkind comments, “is, I think, that the chairmen of the departments are not hands-on in the treatment of trauma patients.” At Hadassah, he believes, “the involvement of senior people in the treatment of patients, together with our experience and knowledge, improves the success rate. Hadassah’s results have been published in the World Journal of Surgery.

In a personal message to the people abroad who support Hadassah, Prof. Rivkind says: “Help us; we need your help. We here are an excellent representative of the Jewish people, so help us to represent you.”