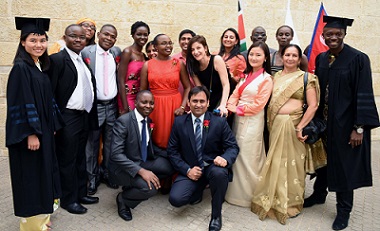 “We need to stop and appreciate the incalculable number of lives we’ve saved–tens of thousands, hundreds of thousands, maybe millions,” said Prof. Alex Brown, MD, a past graduate of the International Masters of Public Health (IMPH) program of the Hadassah Medical Organization’s Braun School of Public Health and Community Medicine.

Speaking at the graduation ceremony, which marked 40 years of the IMPH program, Prof. Brown, who heads up research on Aboriginal Health in Australia, noted that the school “sets us out on a path to pursue knowledge without fear.” He explained: “We learn in Israel something we might not have felt at home–that we should never be afraid of having opinions.”

The 21 graduates from 15 countries marched wearing their native clothing, including saris, sashes, and silk pantaloons. They sang in Hebrew and performed dances from their native lands, to which they will return to take up important positions in public health. Among the countries represented in this year’s graduation class are Cameroon, Guatemala, India, Israel, Ivory Coast, Kenya, Kosovo, Malawi, Nepal, Nigeria, Sierra Leone, Tanzania, Uganda, the United States, and Vietnam.

“We have done our best to prepare you to actively engage in a complex and changing world, to improve the health and well-being of the world’s population,” noted Prof. Yehuda Neumark, Director of the Braun School. He also shared the news of the addition of two environmental epidemiologist researchers to the staff and the fact that the Braun School received full accreditation from the Agency for Public Health Education Accreditation (APHEA).