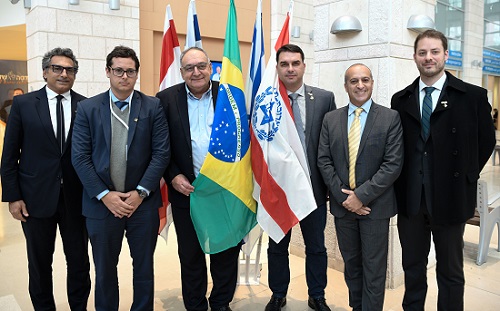 Federal Senator Flavio Bolsonaro, the eldest son of the President of Brazil, made an historic groundbreaking visit to Hadassah Medical Organization’s Ein Kerem campus today as part of the official Brazilian Presidential delegation to Israel, demonstrating the exceptional relationship that Brazil is developing with the State of Israel.

Prof Rotstein, who is a cardiologist, together with the Cardiology Department Director Dr. Refat Jabara, showed the visitors around the Irma and Paul Milstein Heart Center, one of the most advanced in the world.

In the Metta Cohen Pediatric Intensive Care Unit, Director Jacques Braun and nurse Asia Birbrair, who moved to Israel from Fortaleza, Brazil ten years ago, and EEG technician Camilla Kadosh who made Aliya from Manaus 12 years ago, spoke about the Jewish and Palestinian children receiving life-saving care in the department that had been donated by Hadassah Mexico.

The delegation then went four floors below ground and toured the extensive, secure operating rooms. They observed a transplant surgery in progress and a trauma burn case.

As he was walked around the hospital, Senator Bolsonaro was very impressed by the combination of technology, research and the level of the medical doctors that make Hadassah unique.

He remarked about the level of cleanliness, organization, technology and research that is exceptional for a public hospital in most parts of the world, and something that Brazil aspires to implementing, and would like to work cooperatively with Hadassah to make this a reality.

In an emotional moment, Senator Bolsonaro presented white fluffy teddy bears to two small hospitalized children, one Jewish and one Palestinian, whose mothers had brought them to meet the important person from Brazil. Senator Bonsonaro remarked that he was extremely impressed with the “inclusiveness” he saw everywhere as he walked around the hospital.

Said Senator Bolsonaro, “I am so impressed with what I’ve seen here today. The mix of people of all religions, of Jews and Christians and Moslems, Israelis and Palestinians both as patients and staff members is such a positive example of togetherness.

Your sophisticated use of technology aided by the human components is important for me to see. We have human resources in Brazil that need to be put to use.

I am also impressed by the combination of public health care with private donations from good people around the world. I am returning to Brazil with many new ideas.”

He pointed out that even though he is a lawyer and politician, he is not devoid of medical knowledge. His father-in-law is a cardiologist.

Senator Bolsonaro was accompanied on this visit to Hadassah Hospital by Fabio Wajngarten, the President of Hadassah Brazil, other leaders of the Brazilian Jewish community, and Jorge Diener, Associate Director of Hadassah International.

Wajngarten stated “This visit was spectacular, I am so proud as President of Hadassah Brazil that Senator Bonsonaro was able to see Hadassah.”

“Visit to Hadassah, the largest public hospital in Israel, where innovative technologies and a proposed knowledge exchange for health in Brazil were presented.

They take care of over 2 million patients every year, with total coverage and excellence.”

The following link is to the news feature that was broadcast on the main news on Prime time on Record TV, the second largest TV network in Brazil with an audience of about 100 million people.

The news was part of the main coverage of the visit of Brazilian President Jair Bolsonaro to Israel shown at the beginning of the news last night. As well as the coverage of  President Bolsonaro’s activities with Prime Minister Netanyah, the segment included 40 seconds on the visit of Senator Flavio Bolsonaro to Hadassah. You can see the Hadassah segment between 2:40m and 3:20m in the video.

The translation of the voice over and interview in Portuguese in the Hadassah segment of the news feature is the following: “Senator Bolsonaro visited the largest and main Medical Center in Israel, a public hospital. The Senator gave presents to two children, patients at the hospital, one Israeli and one Palestinian. He was very impressed by the quality and quantity of care at the hospital. The reporter asked him if it he believed it was possible to bring this type of hospital with cutting edge technology and public health care to Brazil. He answered that Brazil has the human capacity to do that, that they have to manage better those resources, have more control and transparency over their investments and expenditures in health. We will succeed to get to the level we see at Hadassah”.