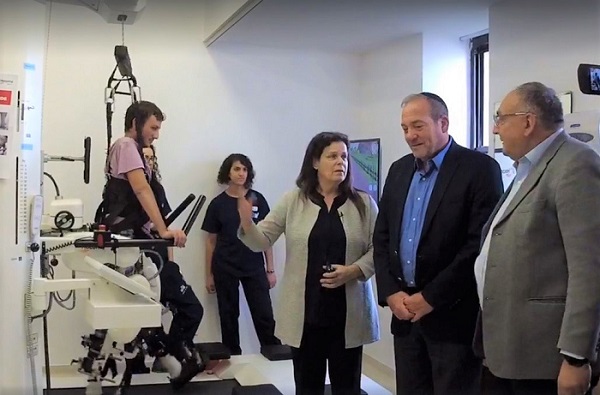 For over two years Hadassah International Israel has worked hard to realize the dream of a new Rehabilitation Center for injured soldiers and civilian patients at the Hadassah Hospital on Mount Scopus. In an emotional ceremony on Jan 2, 2019, Hadassah celebrated the first step in making this dream came true.

Highlighted by the inauguration of an advanced robotic Lokomat to return walking ability to patients with compromised mobility, the cornerstone was laid for the new Rehabilitation Center at Hadassah Hospital Mount Scopus. Both Jerusalem Mayor Moshe Lion and former Knesset Speaker Dalia Itzik, who is the Chair of Hadassah International Israel, participated in the program.

The Lokomat, Israel’s most sophisticated robotic treadmill gait therapy machine, was donated by the International Fellowship of Christians and Jews. Said IFCJ Founder and President Rabbi Yechiel Eckstein, “I have a strong connection to Hadassah Hospital, to Hadassah supporters around the world, and to the city of Jerusalem. In a world in which people talk about ‘branding’, there is no greater ‘brand’ for healing than the word Hadassah. We are proud to support this work, to help soldiers and civilians get back their ability to walk. Jerusalem is not only the capital of Israel but also the center of the world. The Fellowship will continue to support Hadassah Hospital in its sacred work.”

Rabbi Eckstein said he was strongly influenced in bringing the Lokomat project to the IFCJ by Dalia Itzik, as a part of the Hadassah International Israel campaign for the New Rehabilitation Center. Rabbi Eckstein, pointing out that his last name means “cornerstone,” took out a guitar and treated the audience to a rare rendition of “From the Peak of Mount Scopus.”

Making his first visit to the hospital as Jerusalem’s mayor, Moshe Lion described Mount Scopus as “one of the most important places in the history of the Jewish people. I am proud to inaugurate the rehabilitation center that will serve the residents of Jerusalem, regardless of religion, race or gender—over a million people.” The Mayor also praised the contribution of Hadassah Director General Prof. Ze’ev Rotstein and Mount Scopus Director Dr. Tamar Elram.

“We take our ability to walk for granted until we lose it and our independence,” said Dr. Elram, as she celebrated this important occasion for the historic Hadassah Hospital on Mount Scopus.

“Most of our patients come in wheelchairs, and there’s that great moment when they walk out of here,” said Dr. Isabella Schwartz, Head of the Department of Physical Medicine and Rehabilitation as she explained the functioning of the Lokomat to Rabbi Eckstein and Prof. Zeev Rotstein. (See Photo above).

“The Lokomat will play a major role, together with our devoted therapists. There is a video game that not only distracts the patients but which also moves them through virtual landscapes, not with a joystick but interactively through the patient’s own leg movements. That’s a challenge for those who can barely move their legs. The new Lokomat simulates the natural flow of movement better and provides feedback on the progress of training, adjusting the regimen to move the patient ahead. The computer-aided electric motors are attached to the patients’ legs and stabilize them. Whatever the patients cannot do yet, such as lifting their legs, will be done by the robot. Sensors record the exertion and the independent movements of the patient. Robotic support and weight relief can be reduced to promote or extend existing residual movements.”

Demonstrating the Lokomat for the inauguration was Dvir Teitelbaum, a soldier who developed a debilitating neural disease during training and who was suddenly paralyzed. He was treated in the Neurology Department at Hadassah Ein Kerem and later transferred to rehabilitation, where he has worked for the past four months with the physical and occupational therapists. In recent weeks he has begun using the Lokomat, and has already improved his ability to move his legs.

Following the dedication of the Lokomat, the dignitaries and visitors adjourned to the northern flank of the Hadassah Mount Scopus campus, where bulldozers have begun preparing the building site for the New Rehabilitation Center. A time capsule marking the date was buried in the soil to the song “If I Forget Thee Jerusalem.”

For many decades, the Hadassah Rehabilitation Department has been helping tens of thousands of patients, from survivors of terrorist attacks to rescue and security forces, and those injured in road accidents and from disease.

“I am a believer that rehabilitation needs to be built into the program of acute care,” said Director General Ze’ev Rotstein.

The expanded Rehabilitation Center will address the growth in the city’s population, including the longer life spans of Israeli citizens. The modular design by architect Arthur Spector harmonizes with the campus’s desert landscape and, with its enlarged pools and training areas, provides adequate space to patients and therapists.

See Rabbi Yechiel Eckstein, Founder and President of the International Fellowship of Christians and Jews (IFCJ), talk about why the IFCJ donated a Lokomat to Hadassah, and the importance of the New Rehabilitation Center that is now being built at the Hadassah Hospital on Mount Scopus, Jerusalem.