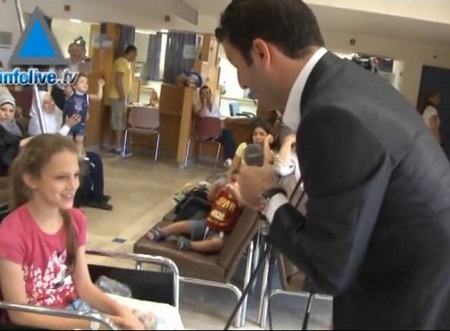 Mr. Serero has given more than 400 concerts and performances throughout the world. Among them was a concert in March of this year for Hadassah France on behalf of the Hadassah Medical Center. This is the second time Mr. Serero, the son of Israeli parents, has performed for patients at Hadassah.

Mr. Serero had responded to a request by Yam Shukron, a pediatric patient with whom he is in close contact, to entertain at the hospital. Yam and his sister, born in New Zealand to Israeli parents, are receiving treatment at Hadassah for cystic fibrosis. Mr. Serero invited Yam, age 9, and his parents to be his guests of honor at a concert he gave a few days later in Tel Aviv. During that concert, he asked Yam to join him on stage to play a few pieces on the piano, to the audience’s delight.

Following this performance, Mr. Serero promised that every time he visits Israel he will come to Hadassah to entertain the patients. “Hadassah,” he says, “is a symbol of coexistence, where everyone lives side by side.”