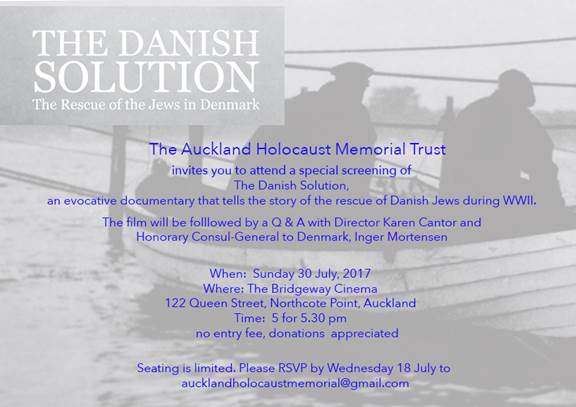 The Auckland Holocaust Memorial Trust is very close to securing a central site in the Auckland Domain to build a reflective memorial incorporating cobblestones originally from the Warsaw Ghetto.

We have been offered the opportunity to host film Director Karen Cantor who made the documentary THE DANISH SOLUTION about how Denmark managed to save 95% of its Jewish population during the Holocaust.

Karen will be in conversation with the Honorary Consul-General to Denmark, Inger Mortensen.

We would like to invite you to this event to learn more about the film as well as to update you on the progress of the Auckland Holocaust Memorial.

The cost of the film is free, but donations will be appreciated. All proceeds will go towards the creation/construction of the Memorial.