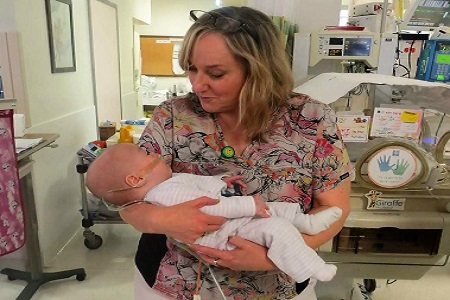 The babies are so small you could hold them in the palm of your hand if they weren’t attached to so many wires and monitors. Their challenges, however, are huge. Born prematurely, these tiny infants require specialized care and nurturing. Their parents are distraught and scared. Their caregivers, the specially trained nurses in the Neonatal Intensive Care Unit (NICU) at Hadassah Hospital Mount Scopus, suffer from stress and burnout.

Daphna Hyvroni not only provides the technical skills and compassion needed in her role as head nurse of the NICU but also offers emotional support to the 50 people on her team as they work to keep the babies alive.

Hyvroni, 59, thought there was a new problem to solve when the Mount Scopus nursing head, Ruth Radiano, asked Hyvroni to come into her office. Once inside, her colleagues began applauding. It was then that Hyvroni learned she was named Nurse of the Year, one of only 12 Israeli nurses so honored. She will receive the award from the Israeli Ministry of Health.

In the NICU, she explains, “we treat newborns who have experienced difficulties in the womb, were born with malformations or were exposed to infections during or after birth. In addition, we treat premature babies as young as 24 weeks and who weigh as little as 14 ounces”.

“The job requires a lot of knowledge, but sometimes you have to think with your heart, too,” said Jerusalem-born Hyvroni, who began working in the NICU in 1996.

When one of Hyvroni’s nurses lost her husband last year, the nurse, who had four children at home, could no longer continue regular shift work.

“While I have to be professional, we’re also a single team like a family, and families go outside of the box for solutions,” she says. Changes were made to the work rotation to accommodate the nurse, and the entire team acted as a support group to help her through the crisis.

Her own support group is her husband, whose name is Yatziv, which comes from the Hebrew word for stability. She gets to see their daughter Gal frequently because she’s a midwife in the Rady Mother and Child Center, also part of Hadassah Mount Scopus.

“I’ve always been encouraged to grow at Hadassah,” says Hyvroni. “I don’t think I know of another hospital that nurtures its nursing staff in this way. As a head nurse, I have so much freedom to implement and make departmental advances, all the while receiving full support. I feel pampered.”

Since 2013, Hyvroni has headed a national forum for antenatal head nurses, which promotes hospital and nationwide policies and advances.

Her days are full of hard work but also miracles. “We have a little boy born at week 26, weighing 1.5 pounds,” she explains. “He needed abdominal surgery. Healing was hard so we made use of a honey-based dressing to close the wound. Our team and his parents were there for him around the clock. He’s making a good recovery.”

As she accepts her award, Hyvroni will dedicate it to her team. “They’re honey based, too,” she says.