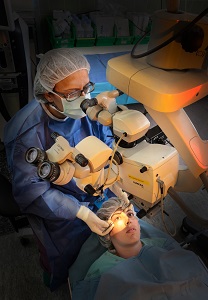 In the largest population-based study to evaluate the prevalence of lazy eye in teenagers, a team of Israeli researchers found that among 1½ million teens aged 16½ to 18 years old, one percent had lazy eye. The prevalence was higher among those with lower socioeconomic status and lower scores on cognitive function tests.

With lazy eye, vision does not develop properly because one or both eyes are unable to build a strong link to the brain. Typically, the condition only affects one eye, causing the child to see less clearly out of the lazy eye and, therefore, to rely more on the “good” eye. If treatment is started early, the eye responds well. However, if the lazy eye is not diagnosed and treated by age 7, the child may have permanent visual damage, which will impair daily activities, such as reading, walking, or driving.

The study was led by Hebrew University’s Prof. Hagai Levine; Dr. Claudia Yahalom, Hadassah Medical Organization pediatric ophthalmologist and director of its Michaelson Institute for the Rehabilitation of Vision; and Drs. Itay Nitzan and Maxim Bez of the Israel Defense Forces Medical Corps. The data were derived from teenagers who were assessed for their eligibility to serve in the military. As part of this assessment, potential recruits undergo mandatory health checks, which include an eye examination, and are asked to provide information regarding their family income, years of schooling, and cognitive function test scores.

Further, the research revealed that the prevalence of lazy eye among young men who grew up in ultra-orthodox settings was twice as high as among those raised in secular communities. There was also a higher prevalence of lazy eye among teens born outside of Israel as compared to those born in Israel. Specifically, immigrants born in the former USSR, North Africa, and Ethiopia had a higher incidence of lazy eye than did immigrant teens from other countries or Israeli teens born to parents from the USSR, North Africa, and Ethiopia.

“We’d like to see changes to Israel’s public health policy, specifically an increase in allocations for vision screening and monitoring of treatment compliance for those populations who are vulnerable to developing lazy eye,” concluded Dr. Yahalom. She added that further research is warranted to better understand the barriers that create differences in the prevalence of lazy eye among various sectors of society.

Prof. Levine noted that the link between socioeconomic factors and lazy eye may stem from a failure of some parents to bring their children in for vision screening or to follow through on a treatment plan.

The study appears in the September 14 issue of the European Journal of Public Health.