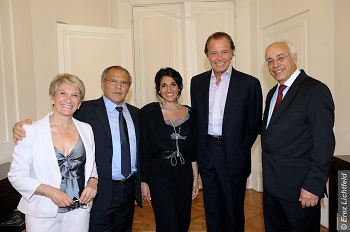 On June 6, Hadassah France hosted an evening of jazz and a cocktail reception at the beautiful residence of the Ambassador of Israel in France, His Excellency, Mr. Yossi Gal. The 140 attendees were treated to an evening with comedian and sponsor of Hadassah France, Michel Leeb, and two musicians who played great jazz classics. With his inimitable talent, Mr. Leeb had the audience laughing all evening.

Ambassador Gal, praised the work of Hadassah and called for the strengthening of the scientific cooperation between France and Israel.