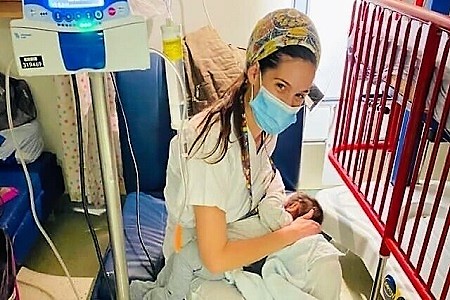 Despite the fact that Hadassah Hospital Ein Kerem nurse Yael Cohen had never breastfed a baby other than her own, her motherly instinct led her to volunteer to nurse the baby of an Arab mother badly injured in a car crash and hospitalized at Hadassah with her two daughters.

“We were able to convince the 6-year-old to eat,” relates Cohen, who works in Hadassah’s Pediatric Surgery Unit. “We encouraged her with a lot of warmth and smiles. But the baby, who is used to nursing exclusively, refused the bottle. It broke me to see the baby suffering, hungry and without her mother at her side,” she relates.

When members of the baby’s extended family arrived at the hospital, they, too, tried to get the baby to eat, but to no avail. “I asked the aunt who was taking care of the baby if she wanted me to nurse her,” says Cohen. “I wanted to make sure that it was okay with her. She immediately thanked me. She already felt helpless and did not know what to do.”

Cohen adds, “I don’t ask who the family is. I embrace them with all the tools and compassion possible.”  Read the full story on israelnationalnews.com

Read about another Hadassah nurse who came to the rescue of a Palestinian mother in a similar way.

Photo caption: Nurse Yael Cohen with the infant daughter of an East Jerusalem woman who was seriously injured in a car accident, March 10, 2021