Marathoner Is Helicoptered to Hadassah After Collapsing During Race 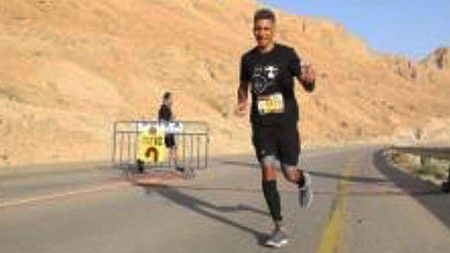 Translated and excerpted from Ynet

Shahar David, age 46, had planned to run 10 kilometers in the Dead Sea Marathon, but he collapsed after kilometer 6. A helicopter transported him to Hadassah Hospital Ein Kerem, where he underwent an emergency cardiac catheterization that saved his life.
Running in the marathon with his 17-year-old nephew, David was photographed making the victory sign V at kilometer 6. But then, according to other runners, he suddenly collapsed. His fellow runners tried to revive him, as did paramedics, who used electric shock to restart his heart.

David’s wife, Vered, recalls, “I received a phone call from an unknown caller while I was waiting to hear from Shahar. I had a bad feeling. The stranger at the other end of the line was Hadassah cardiologist Dr. Ronen Durst.

‘What happened to Shahar?’ I asked.”

Dr. Durst told her that Shahar had collapsed while running and had already undergone a life-saving catheterization at Hadassah Hospital in Jerusalem. “It was shocking, but the doctor was sensitive,” she says. “When I realized that Shahar was in expert hands at Hadassah, I felt calmer.”
Dr. Mony Shuvy, who performed the catheterization in the new Paul and Irma Milstein Heart Center, relates, “I got the call Friday morning and arrived the same time as the helicopter. Shahar had a heart attack with total heart stoppage. He was in mortal danger.”

Finding significant blockage due to a blood clot, Dr. Shuvy implanted a stent. “He will gradually get better and return to physical activity,” he says, “although I don’t know about marathons.”
David’s wife comments, “So many good people took care of him, from the moment he fell to the completion of his procedure at Hadassah Hospital. Today, one of the participants in the marathon came to make sure he is okay. She hadn’t been able to sleep for three nights. The doctors and nurses in the Intensive Care Unit are so caring. All the angels on this journey gave Shahar back to us, and we will be forever grateful.”