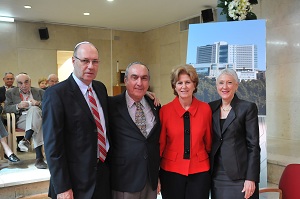 When Marjorie Mizrachi founded Hadassah Panama in 2006, the Sarah Wetsman Davidson Hospital Tower was still a dream. Last week the Mizrachi family stood inside that Tower and represented the Jewish community of Panama honoring the late Chief Rabbi Sion Levy and their own devoted family. The auditorium of the 19-story advanced medical Tower is named for Rabbi Levy, and the Family Waiting Area in the Surgical Intensive Care Center is named for the Mizrachi family. Moy Mizrachi was honored with leading the havdalah ceremony for the pre-mission of the Society of Major Donors, an honor he passed to his son, David. “I’m very emotional and very happy,” said Moy Mizrachi. “Everybody is on this earth for a special reason. When I was asked to make havdalah, I asked if it was okay for my son to do it. Listening to my son, David sing with confidence, you could feel his commitment. One of the most important values for us is to pass the commitment to our children, midor ledor, as they say in Hebrew. I was always involved in community activity and thought I would retire. But when I met all these people who are so involved, I said I guess I wasn’t meant to retire.”