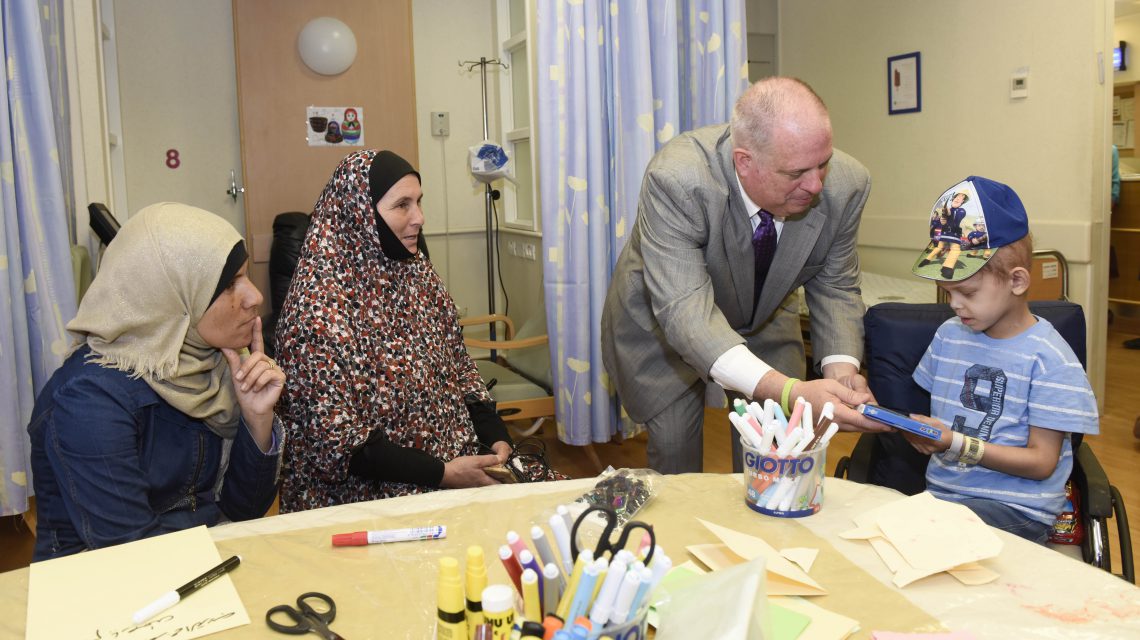 Governor Hogan offers encouragement to Muhammad Alkadi, age 6, a patient in the Pediatric Hemato-Oncology Department at Hadassah Hospital Ein Kerem, who comes from Rafah in Gaza.

“Baltimore, Maryland’s largest city, is where this all started,” said Hadassah Offices in Israel Deputy Director Barbara Goldstein in her presentation about Hadassah Founder Henrietta Szold, who was born in Baltimore. “Miss Szold’s earliest memory was being lifted on her father’s shoulders for the funeral cortege of Abraham Lincoln. Her love of America and of Judaism were deeply entwined,” explained Mrs. Goldstein.

While at Hadassah, the Governor spent time with the young patients in the pediatric hemato-oncology unit, where he personally encouraged the children, sharing the story of his own cancer battle with them. He also toured Hadassah’s shock trauma unit, which was patterned after the one at the University of Maryland. Prof. Avi Rivkind, head of the Division of Emergency Medicine and past Director of the Trauma Unit, thanked the Governor for the seminal training he had received at the University of Maryland’s shock trauma center. “We have saved thousands of patients as a result of what we’ve learned in Maryland,” Prof. Rivkind told the Governor. He emphasized the ongoing cooperation with the University of Maryland and offered to share Hadassah’s unique two-week terror medicine training program for all Hebrew University-Hadassah medical students.

Gov. Hogan was accompanied by a large delegation, including his personal physician, Dr. Aaron Rapoport of the University of Maryland Medical System; Dr. Mort Rapoport, formerly a member of the Hadassah Medical Organization Board; Michael Greenebaum, President of Greenebaum Enterprises; Abba Poliakoff, Chair of the Baltimore Jewish Council; and Bonnie Glick, Co-chair of the Maryland-Israel Sister State Committee and Hadassah life member. The delegation also paid a visit to the Marlene Greenebaum Interdisciplinary Breast Center, named for Michael Greenebaum’s mother, a breast cancer survivor and activist for increasing awareness and research.

The symposium featured presentations by Prof. Howard Cedar of the Hebrew University-Hadassah School of Medicine, who described DNA methylation, the mechanism that turns genes on and off and provides the science for breakthroughs in cancer treatment; Dr. Aaron Rapoport, who spoke about the immunotherapy that is used to treat lymphoma; and Prof. Michal Lotem, head of the Center for Melanoma and Immunotherapy at Hadassah’s Sharett Institute of Oncology, who spoke about innovative preventive vaccines for patients who have already contracted melanoma and are at high risk for a repeated malignancy.

Governor Hogan spoke about his own battle with cancer–how soon after he was inaugurated, he discovered a swelling in his neck and was diagnosed with non-Hodgkin lymphoma. He underwent half a year of chemotherapy. “I believe that with all these good minds, in Maryland and Hadassah and other places, we will see a cure for cancer in our lifetimes.

“We have had a fascinating visit,” Governor Hogan noted, “and we look forward to even more cooperation with Hadassah in the future.”