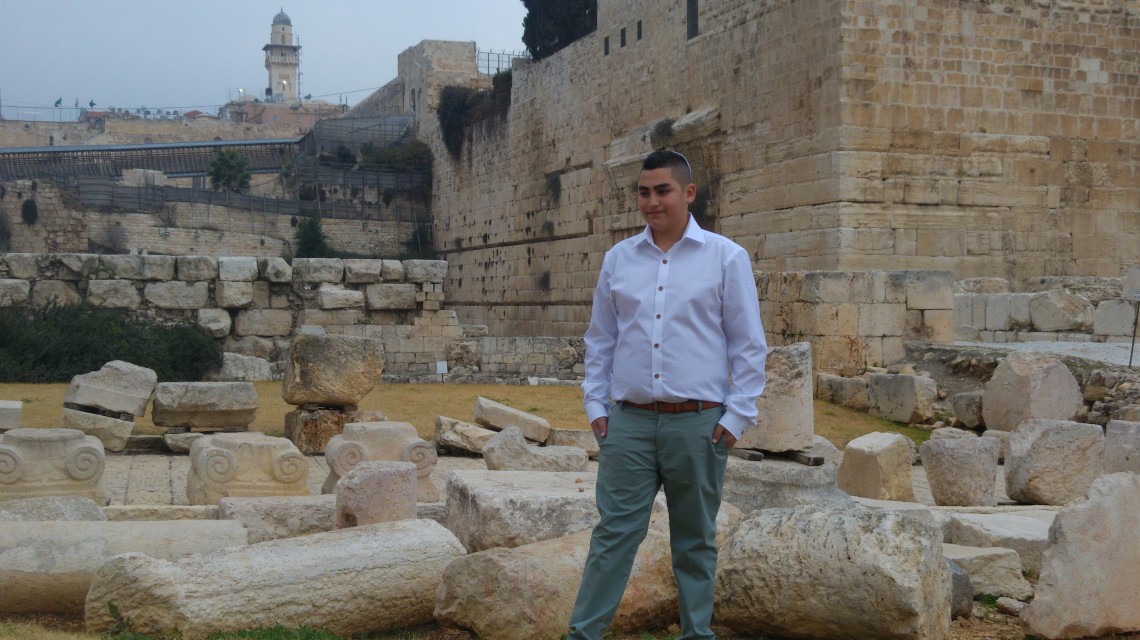 In this wintry Hebrew month of Tevet, we pray for rain and follow reports on the water level of the Kinneret. But on this special
day I’m glad for the Jerusalem sunshine breaking through in the Old City. It’s the Bar Mitzvah celebration of a young man whose name means Light – a youngster who has walked through the valley of the shadow of death and emerged with the help of Hadassah.

The Bar Mitzvah boy is easy to spot among the crowd of celebrants and camera persons. He is wearing a crisp white shirt, pistachio-colored trousers, blue and white kippa with a Star of David clipped onto that morning’s buzz haircut. Chairs are set in the archaeological plaza in the Old City. Around us are the huge stones fallen from the Herodian Temple. One stone contains the inscription, L’Beit Tekia, “to the House of the Shofar Blowing.” Many shofar blasts will be blown today as we celebrate the Bar Mitzvah of Naor Shalev Ben-Ezra.

This coming of age ceremony is for a boy who on October 13 was thought to be dead by those who saw him being carried from the
street in Pisgat Zeev. Indeed, when he arrived at Hadassah Mount Scopus, his pulse had fallen to 20; the staff couldn’t get a blood
pressure reading.  Relatives were already receiving condolence text messages on their phones.  Then, the heroic, creative doctors and nurses used all the knowledge and experience they’d acquired over years and decades and brought him back.

And here we are at the holiest Jewish site, rejoicing with one very alive Naor with his electric, irresistible smile, and friends and family.

On that fall day in October, Naor had gone with his little brother Orlev to visit their ailing Grandma. Naor was riding his bike. Two
teen-terrorists, cousins aged 15 and 13, had walked down the hill from nearby Beit Hanina carrying knives. They wanted to slaughter Jews. They came upon a 21-year old first and cut him up badly. Next they spotted Naor and Orlev near a toy store. They plunged long blades into Naor while Orlev watched in horror.

Everyone in the Bar Mitzvah crowd knows the story, but no one mentions this horror.  It’s time to celebrate. Besides, Naor’s Grandma is here, among the many family members and friends. Only this week did the family gently tell her about what had happened to her grandson when he came to visit. Before that, she was told he’d had a “bike accident.”  A mother of 11, Naor’s Grandma has arrived in wheelchair, glowing with joy for her grandson.

Naor’s mother Ruthi and his Dad Shai say today is only about joy. Naor and the traumatized Orlev are so happy. Our procession moves towards the Kotel plaza. Drums and shofar blasts and singing accompany every step. We stop as blue and white helium balloons are released into the sky. Raindrops dampen the tallit held above Naor’s head like a huppah. We move through the security checks to the underground tunnels where the morning prayer ceremony will take place.

Is there a dry eye? Naor’s cousin Etti, a midwife at Hadassah, puts her arm around me.

My turn at the mike, I assure the crowd that that this isn’t just a family celebration-that the Hadassah family around the world is
celebrating-today.  So, l’chayim to each and everyone of you contributing time and funds to Hadassah.  You made this dream come true.  Mazal tov!