Medical Miracle at Hadassah: Surgeons Save Man with Rod Through His Head 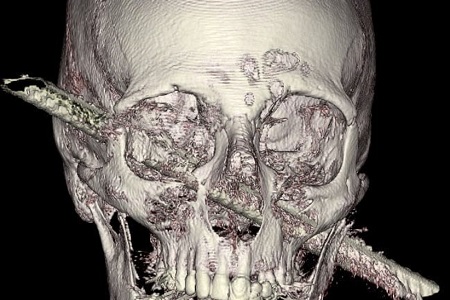 About four weeks ago, Kamel Abdel Rahman went to see how the construction was going on in his new apartment. As he looked around, one wrong turn caused him to fall from the second floor onto an iron rod, which penetrated his skull. It traveled from one side clear to the other.

“I did not feel any pain at all,” Rahman said. “I do not know how to explain it.” But when he saw the look of shock on his family’s faces, he knew something was seriously wrong.

Rahman was rushed to Hadassah Hospital Ein Kerem. There, a multidisciplinary team of specialists carefully analyzed the wound for hours to ensure that they would not cause an artery to bleed, which could result in sudden death. Once assured, they strategically removed the rod.