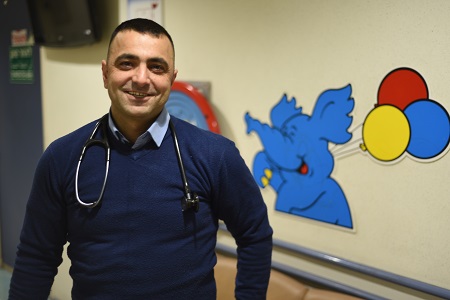 The young doctor rings the doorbell on Star Street in Bethlehem, hoping the parents will still go along with the request he made of them to provide blood samples. Dr. Ibrahim Abu Zahira is on a mission. He and his colleague, pediatric cardiologist Dr. Asaf Ta-Shma, are determined to solve the mystery of congenital heart disease. The family behind the door has lost one child to heart disease. A second child is now a cardiac patient at Hadassah Hospital Ein Kerem, where both doctors work. Like many of the parents of their patients, the mom and dad are cousins.

“In recent years, we’ve identified a number of genetic mutations that cause congenital heart disease,” explains Dr. Abu Zahira. “When we see children with a congenital heart defect, we reach out to family members. If we find out the family has a particular mutation, we can help them.”

The doctor gets a warm welcome and a cup of steaming tea from the parents. Most importantly, all members of the family permitted him to take blood samples. “The Palestinian families of our patients are usually eager to cooperate,” says Dr. Abu Zahira. “We make it easier by going house to house to collect the blood samples.”

This painstaking genetic research has resulted in the discovery of seven genes that are linked to the kind of heart disease they treat in their small patients. “For a doctor, this is a dream come true,” comments Dr. Abu Zahira. “Not only are we treating children with heart disease, but we are also identifying its causes. This can lead to the elimination of the defect and, therefore, the heart disease.”

Growing up in Harasa, a village near Hebron, Dr. Abu Zahira, now 47, knew he was destined to become a physician. No one in his family was a doctor, nor had anyone gone on to higher education. But in his heart, he knew.

“I didn’t marry until age 37 because I was so determined to get all my qualifications,” says Dr. Abu Zahira. “My mom was so proud of her ‘son the doctor’, but kept asking ‘when will you tie the knot?’ ”

Today, Dr. Abu Zahira is the father of two children, Khaled, age 2, and Linal, age six months. Not only is he a pediatric cardiologist at Hadassah, but he also runs clinics in Hebron and Bethlehem and consults in a Ramallah hospital. When he is particularly busy and can’t get home for the night, he speaks with his wife, Naila, and his children via Skype.

It has been a long journey for Dr. Abu Zahira to establish his distinguished medical career. When he finished high school, there was only one Palestinian medical school in existence. Competition for admission was intense, and he did not get in. He set his sights instead on studying in Germany and began comprehensive German studies. German is one of the seven languages he speaks.

Coming from a poor family with seven siblings, he realized he would have to work in Germany to fund his studies. The authorities in Berlin required a financial guarantor to back him, and he couldn’t find one.

Disappointed, Dr. Abu Zahira decided to try Russia, where education is less expensive. There, he was successful. He attended medical school in Stavropol and, after seven years, left the city with two degrees, one in medicine and the second in teaching.

Dr. Abu Zahira then completed his residency at Makassed Hospital on Jerusalem’s Mount of Olives and began working as an internist in Bethlehem. After a year, he was sent to a Paris hospital to specialize in neonatal care.

For four years, Dr. Abu Zahira commuted between hospitals in Paris and in Liege, Belgium. He then returned to Bethlehem, where he took a senior position in neonatal intensive care. When he learned that there were only two pediatric cardiologists in the West Bank, he met with Hadassah’s head of pediatric cardiology Prof. Azaria Rein to request training, which led to his subspecialty as a pediatric cardiologist at Hadassah.

Looking ahead, Dr. Abu Zahira would like to create a Hadassah-associated cardiac team that will be able to offer pediatric cardiology services like catheterizations within Palestinian cities. “Palestinians, Israelis–-that’s irrelevant,” he says. “We’re all working to save lives.”