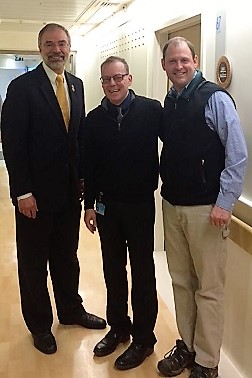 At the hospital they met with former Silver Springs, Maryland, residents Judy and Joe Felber, whose son Nathaniel was critically wounded in a terrorist attack in December. He is a patient in the neurosurgery department in the Sarah Wetsman Davidson Hospital Tower. Senior surgeon Iddo Paldor briefed the members of Congress on Nathaniel’s condition. They also met with Prof. Raphael Mechoulam, the world pioneer in medical marijuana research.

Said Rep. Harris, an obstetric anesthesiologist, “We are impressed with the high level of medicine at Hadassah Hospital, in an area surrounded by not-so-friendly neighbors, and with the diversity of the population and the staff.”

Rep. Barr expressed interest in meeting with members of Hadassah who are his constituents in Lexington, Kentucky. “I am moved by the long-term relationship between our medical community in Lexington and their colleagues at the Hadassah Medical Organization.”

Hadassah Offices in Israel Deputy Director Barbara Goldstein presented the members of Congress with copies of Israel at 70, Hadassah at 100. Said Goldstein, “As an American institution in Israel, we are proud to host you and honor your service to the American people and your deep commitment to Israel. Please return soon with your families.”